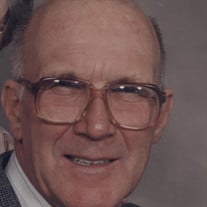 ALLEN JAMES ARNDT, age 82 of Harbor Beach, passed away Monday, June 27, 2016 at Lakeview Extended Care and Rehab Center of the Harbor Beach Community Hospital. He was born on April 4, 1934, in Harbor Beach to the late Carl and Ella (Rupp) Arndt. He was baptized in Trinity Lutheran Church in Forestville. Allen grew up on the family farm, he sailed the great lakes for 3 seasons, just out of high school, before being drafted into the US Army from 1957 to 1959, as a mechanic. He and Marjorie Edwards were united in marriage on April 25, 1959. Together they purchased the dairy farm together. Allen enjoyed giving bear hugs, tractor rides with his John Deere AR through the woods, watching ships pass under the Blue Water Bridge in Port Huron, going for afternoon rides to look at crops, getting ice cream cones, and his wife’s homemade apple pies and bread. He is survived by his wife Marjorie Arndt of Harbor Beach, and children: David Arndt and his wife Carrie, Sue Czaja and her husband Mike, Betty Arndt Hurt, and her husband John, and Sherrie Bender and her husband Rich, Grandchildren: Beth (Nick) Gornowich, Renee (Scott) Stacer, Amy (Kyle) O’Connor, Kimberly Czaja and Flora Lynn Czaja, Alex (Al) Hurt, Marc Hurt, Richard Bender and Sophia Bender, Great Grandchildren: Nichole, Lily, Genavieve, Leadell, Lauren, Clara and Gordon, Siblings: Ron (Judy) Arndt, Ken (Delorse) Arndt, and James Arndt. Funeral Services for Allen will be Wednesday at 1:30 pm at Zion Lutheran Church of Harbor Beach, with Rev. Ron Schultz officiating. Burial will follow in the Zion Church Cemetery in Ruth. Visitation will be on Tuesday from 2-8pm at the Ramsey Funeral Home of Harbor Beach. Visitation on Wednesday will be at the church beginning at 12:30 pm, until time of services at 1:30 pm. Memorials may be given to Heartland Hospice, Zion Lutheran Church, and the Harbor Beach Community Hospital. Memories can be shared at www.RamseyFH.com

The family of Allen J. Arndt created this Life Tributes page to make it easy to share your memories.

Send flowers to the Arndt family.