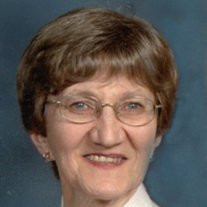 After giving it the good ole Catholic School Girl fight against cancer, Arlene E. Ingles, age 76, passed away on July 31, 2013 in the same home she was born in. Arlene was born on July 20, 1937 in Harbor Beach, to the late Theresa ( Miller) Woychowski and William Woychowski. Arlene was a graduate of Our Lady of Lake Huron Catholic School, and a member of the American Legion Auxilary. On August 1, 1955 she married Oscar Ingles in Harbor Beach. He preceded her in death on June 28, 2012. She continued to share and pass on their good sense of humor, love and compassion for others. She enjoyed many years working with family and friends at “ The Seat Belt” in Ubly and Bad Axe, and the Harbor Beach Times. Her hobbies were doing beautiful work with her hands, crocheting, counted cross-stitch, canning and going to the casino….beginning with a good “burger and a beer.” Arlene’s greatest joy was spending time with family, especially her grandchildren and great grandchildren. Arlene is survived by her four daughters: Kathy and Dennis Roggenbuck, Karen Ingles, Carol and James Willis, Bridget and Tom Kirsch, 13 grandchildren: Tony & Lori Roggenbuck, Gregg & Angie Tenbusch, Lindsay Tenbusch, Carlee Arlene & Jesse Pierce, Haley Pelter, Dustin Kirsch, Terry Kirsch, Amanda Kirsch, Luke Kirsch and Jacob Oscar Kirsch. 6 great grandchildren: Cole and Kacie Roggenbuck, Nimue and Frankie Grace Tenbusch-Stoken, Lincoln James Peltier and Huxlee Carol Pierce. One brother Richard & Alice Woychowski, 2 sisters-in-law: Dorothy Woychowski and Andrea Miller. She was preceded in death by 3 brothers: Raymond and Louis Woychowski and Ronald Miller. Funeral Services for Arlene will be Monday, August 5, 2013 at 10 am at Our Lady of Lake Huron Catholic Church, of the Holy Name of Mary Parish, with Fr. William Spencer officiating. Cremation will follow at Sunset Valley Crematory of Bay City. Visitation for Arlene will be on Sunday from 3-8pm at the Ramsey Funeral Home of Harbor Beach. Visitation on Monday will be at the church beginning at 9am until time of services at 10am. A Parish Vigil Service will take place Sunday at 7 pm in the funeral home. Memories can be shared at www.RamseyFH.com.

After giving it the good ole Catholic School Girl fight against cancer, Arlene E. Ingles, age 76, passed away on July 31, 2013 in the same home she was born in. Arlene was born on July 20, 1937 in Harbor Beach, to the late Theresa ( Miller)... View Obituary & Service Information

The family of Arlene E. Ingles created this Life Tributes page to make it easy to share your memories.

After giving it the good ole Catholic School Girl fight against...

Send flowers to the Ingles family.