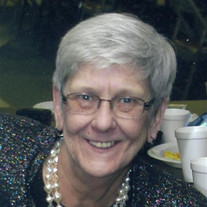 BERNADINE M. “BERNIE” MARSH, age 76 of Port Hope, passed away Thursday, February 14, 2019 at McLaren Thumb Region of Bad Axe. She was born on December 28, 1942 in Detroit to the late Michael J. and Elsie (Bartels) Matczak. She graduated from Denby High School in Detroit in 1960. Bernie and T. David Marsh were united in marriage on December 18, 1982 in Detroit. He preceded her in death on August 26, 2003. Bernie was a member of Our Lady of Lake Huron Catholic Church of Harbor Beach. She was President of the Port Hope Chamber of Commerce for over 15 years, Past First Vice-President of the Port Hope AmVets Auxiliary Post 115, member of the Grindstone-Port Hope Sportsmans Club, was an avid Pool Player in the Upper Thumb Traveling Pool League for 20 years, and owned the 4 Season’s Café in Port Hope since 1993. She was a former employee of Montgomery Wards in Detroit, Bigelow Liptak Co. in Southfield, The Stroh Brewery in Detroit, The National Cash Register Co. in Detroit, Dayton, OH and Flint, The Halkey-Roberts Co. in St. Petersburg, FL, Bernie and her husband worked for Clark Products of Las Vegas, demonstrating wood working Equipment when they were full time RV’ers for Five Years before purchasing the 4 Seasons Café in Port Hope. Bernie is survived by her brother, Clifford (Sandra Sue) Matczak of Port Hope, step-daughters: Cheryl (Bob) Elliott of Kansas City, KS, Teri (John) Roller of Gilbert, AZ, step-grandchildren: Karli, Casey, and Kyle, brother-in-law Mike (Tudy) Florence, WA, and nieces and nephews: Alyse Kozfkay, Mark Matczak, Dawn Burgess, Chad Toms Alison Roberts and many cousins. She was preceded in death by her sister, Lori Roberts, and her brother Michael Matczak Funeral Mass for Bernie will be Tuesday, February 26, 2019 at 11 am at Our Lady of Lake Huron Catholic Church, of the Holy Name of Mary Parish, with Fr. George Amos officiating. Cremation will follow at Sunset Valley Crematory. Internment will be in New River Cemetery. Visitation for Bernie will be Monday February 25, 2019 from 2-8pm at the Ramsey Funeral Home. Visitation on Tuesday will be at the church beginning at 10 am until time of services at 11 am. A White Clover Service will take place Monday at 6:30 pm at the funeral home, and a Parish Vigil Service will take place on Monday at 7 pm. Memorials May be given to the AmVets Post 115 of Port Hope. Memories can be shared at www.RamseyFH.com

The family of Bernadine M. Marsh created this Life Tributes page to make it easy to share your memories.

Send flowers to the Marsh family.