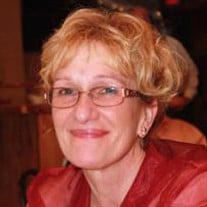 Betty J. (Messing) Frost of Plover, Wisconsin, passed away Friday, April 17, 2015. She was born on January 10, 1959 in Bad Axe to the late Ray & Bertha Messing. She attended Harbor Beach Community High School, graduating in 1977. Betty was a devoted mother to her two children, Randy and Jim and had lived in various states including: Michigan, New Mexico, Oklahoma, Virginia, New York and settling in Wisconsin. In addition to being a stay at home mother and in home daycare provider for many years, Betty worked at McDonalds in Plover and has most recently been employed at Lowes. She enjoyed cheering on her Michigan Sports Teams, playing cards and bingo, completing word finds and spending time with her children and grandchildren. Betty is survived by her loving children: Randy (Lynn) Frost of Plover, and Jim (Sara) Frost and two grandchildren: Sawyer and Rohan Frost of Stevens Point, Wisconsin. Her siblings: John (Peggy) Messing of Harbor Beach, Judy (Angus) Booms of Harbor Beach, Donna (Leo) Emming of Ruth, Florence (Richard) Wolschleger of Ruth, Bernard (Pauline) Messing of Minden City, Marie Gay of North Prince George, Virginia, Darlene (Florenzio) Ornelas of Beaverton, George (Linda) Messing of Fresno, CA, Ivan (Lori) Messingof Minden CIty, Alvin Messing of Ruth, and many nieces and nephews. A celebration of life service was held on April 26, in Wisconsin. A Memorial Service for Betty will be Saturday, May 2, 2015 at 11 am, at Sts. Peter and Paul Catholic Church of the Holy Apostles Parish of Ruth. Internment will be in St. John Catholic Cemetery in Forestville. A gathering will be at the church beginning at 9 am until time of services on May 2, 2015. Local Arrangements have been handled by the Ramsey Funeral home of Harbor Beach.

The family of Betty J. (Messing) Frost created this Life Tributes page to make it easy to share your memories.