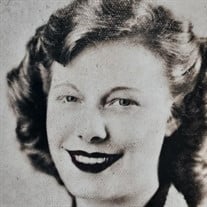 Beulah Barger Henderson February 21, 1932 - January 4, 2022 Known for her beauty, strength, and tenacity. Beulah was born in Leatherwood, Kentucky, the fourth of nine children. At just 14, she embellished her chronological age to become a major bread-winner and caretaker of her brothers and sisters. Later, she traveled the country, collecting stickers on her suitcase like stamps on a passport. It was during that time that she met her future husband, Wilson, at a bus station in Indiana. Wilson was stationed at Camp Atterbury, Indiana, training for deployment in the Korean War. Three years and many letters later, they married and settled in Clarkston, Michigan and raised three children. Beulah did home healthcare during much of her time spent there. They retired in Wilson’s hometown of Harbor Beach, Michigan. Beulah is preceded in death by her husband, Wilson Henderson, and her daughter, Rebecca Henderson. She is survived by three siblings, Bertha (Denver) Campbell, Neva Adkins, and Robert Baker; her daughters, Laura Hufford and Judith Henderson; her grandchildren, Roy Henderson and Portia (Nathaniel) Taylor; her great grandchildren, Carson Taylor, Roy Henderson Jr, Jordan Henderson, and Rico Henderson; and many other family and friends. Memorial services are to be announced at a later date. May future generations inherit her spirit of perseverance in the face of obstacles.

Beulah Barger Henderson February 21, 1932 - January 4, 2022 Known for her beauty, strength, and tenacity. Beulah was born in Leatherwood, Kentucky, the fourth of nine children. At just 14, she embellished her chronological age to become... View Obituary & Service Information

The family of Beulah Henderson created this Life Tributes page to make it easy to share your memories.

Send flowers to the Henderson family.