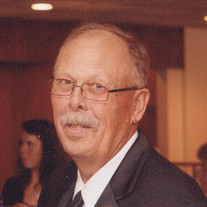 BLAIR GORNOWICH, age 57 of Harbor Beach, passed away, Tuesday, November 01, 2016 at his home under hospice care. He was born on November 5, 1958 in Harbor Beach to Joan Maurer, and the late Gerald Gornowich. Blair and Marilyn Moore were united in marriage on April 21, 1979 in Detroit. Blair was owner and operator of his own plumbing shop. He was a member of the Harbor Beach, Gun Club, Verona Hills Golf Club, and former member of the Harbor Beach Fire Department, and the Eastern Huron Ambulance Service. He enjoyed camping, fishing, hunting, spending winters in Florida, playing cards, playing in Fantasy Football, visiting the casino, but most of all, being with his granddaughter and family. Blair is survived by his wife Marilyn Gornowich of Harbor Beach, and two sons: Douglas Gornowich and his wife Sheila of Rochester Hills, and Philip Gornowich and his wife Jessie of Bad Axe, his granddaughter: Melanie Mae, his mother: Joan Maurer of Harbor Beach, his grandmother: Roseanna Kramer of Harbor Beach and his siblings: Kim Clark and her husband Dennis of Harbor Beach, Reneen Gornowich of Florida, and Jody Gornowich of Harbor Beach. Funeral mass for Blair will be Friday, November 4, 2016 at 11:30 am at Our Lady of Lake Huron Catholic Church, of the Holy Name of Mary Parish, with Fr. William Spencer officiating. Cremation will follow at Sunset Valley Crematory of Bay City. Visitation for Blair will be on Thursday, from 2-8pm at the Ramsey Funeral Home of Harbor Beach. Visitation on Friday will be at the church beginning at 10 am until time of services at 11:30 am. A parish vigil service will take place Thursday at 7 pm at the funeral home. Memories can be shared at www.RamseyFH.com

BLAIR GORNOWICH, age 57 of Harbor Beach, passed away, Tuesday, November 01, 2016 at his home under hospice care. He was born on November 5, 1958 in Harbor Beach to Joan Maurer, and the late Gerald Gornowich. Blair and Marilyn Moore were united... View Obituary & Service Information

The family of Blair Gornowich created this Life Tributes page to make it easy to share your memories.

Send flowers to the Gornowich family.