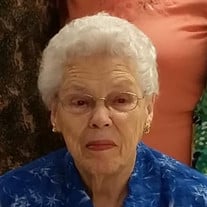 Blanche Helen Laeder. age 98 of Harbor Beach passed away at Marlette Extended Care in Marlette, Michigan on August 29, 2017. She was born November 24, 1918 in Harbor Beach, Michigan to Joseph and Susie (Ramsey) Neal. Blanche graduated from Harbor Beach High School in 1936 and went to work at LP Healy's store in Harbor Beach until her marriage to Leonard Laeder on May2, 1940. Blanche and Leonard farmed most of their married life in Sand Beach Township. They were active in the Farm Bureau. Blanche was a former Sigel Township Extension Homemaker member. Blanche and Leonard moved from the farm on Finkel Road to the city of Harbor Beach in 1983 and spent their winter months in Lakeland, Florida. Blanche is a member of the Zion Lutheran Church, played the piano for the Bible Studies Group at Long Term Care in Harbor Beach, played cards with friends, enjoyed crafts, knitting, crocheting, cross stitch and plastic crafts. Blanche was a former member of Port Hope Retirees and Harbor Beach Senior Citizens groups. Blanche is survived by Susan K. Laeder of Clearwater, Florida, Diane (Thomas) Glaza of Marlette, Michigan, Neal (Nancy) Laeder of Harbor Beach, Michigan, and daughter-in-law Flavia Maya Laeder and her daughter, Jeanine of Chesterton, Indiana. Eleven(11) grandchildren, nineteen(19) great grandchildren, and one(1) great great grandchild, two(2) sisters, Della (Howard) Finkel of Harbor Beach, Michigan and Bernice Asher of Haslett, Michigan. Proceeding her in death, Leonard Laeder 1990, a stillborn son Laverne 1948, son-Wayne Laeder in 2016, daughter-in-law Geraldine (Thompson) Laeder, sister-Gertrude Arndt and brother-in-law Edward Arndt, and brother-in-law Earl Asher. Funeral Services for Blanche will be on Monday, September 4, 2017 at 11 am at Zion Lutheran Church of Harbor Beach, with Rev. Ron Schultz officiating. Burial will take place on Tuesday, September 5, 2017 at Rock Falls Cemetery. Visitation for Blanche will be on Sunday, September 3, 2017 from 2-8pm at the Ramsey Funeral Home of Harbor Beach. Visitation on Monday will be at the church beginning at 10am until time of services at 11 am. A Scripture Service will take place on Sunday at 7:30 pm at the funeral Home. Memorials may be given to the Zion Lutheran Church in Harbor Beach, Our Savior Lutheran in Marlette, or United Hospice Service in Marlette. Memories can be shared at www.RamseyFH.com

The family of Blanche H. Laeder created this Life Tributes page to make it easy to share your memories.

Send flowers to the Laeder family.