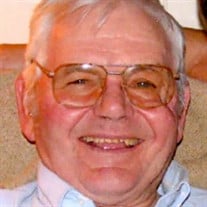 CARL ROGGENBUCK, age 80 of Port Hope, passed away Friday, August 07, 2015 at Courtney Manor Nursing Center of Bad Axe. He was born on January 10, 1935 in Harbor Beach to the late Leo and Clara (Booms) Roggenbuck. Carl served in the US Army from 1958-1959. He and Carol Stein were united in marriage on June 18, 1960 in Ruth. Carl was a member of Our Lady of Lake Huron Catholic Church. He enjoyed tinkering in his work shop, work was his hobby, and his hobby was his work. Carl was an inventor, entrepreneur, and was a business man with his tiling company. He loved working on the farm, and loved being a husband, father, and grandfather. He is survived by his wife Carol Roggenbuck of Port Hope, and children: Chris Roggenbuck of Sacramento, CA, Kevin Roggenbuck and his wife Diana of Harbor Beach, Jeff Roggenbuck and his wife Lisa of Greenfield, Maine, Keith Roggenbuck and his wife Laurie of Cass City, and Cathy Heleski of Bad Axe, his grandchildren: Tacarra, Miranda, Ryan, Danielle, Derek, Zane, Seth, Evan and Krista, siblings: Edna Roth of Bad Axe, Becky Groll of Littleton, Colorado, Anita (Scott) Plummer of Utah, Lula Roggenbuck of Utah, Vincent (Phyllis) Roggenbuck of Snover, Orville (Lucy) Roggenbuck of Snover, Earl (Brenda) Roggenbuck of Bad Axe, Harry (Delores) Roggenbuck of Harbor Beach, sisters-in-law: Barb Roggenbuck of Ubly, and Bertha Roggenbuck of Snover, and many nieces and nephews. He was preceded in death by his siblings: Aletha Romzek, Monie DeYoung, Jerome Roggenbuck, Chuck Roggenbuck, and Glen Roggenbuck. Funeral mass for Carl will be Sunday, August 16, 2015 at 1 pm atOur Lady of Lake Huron Catholic Church, of the Holy Name of Mary Parish, with Fr. William Spencer officiating. Cremation will follow at Sunset Valley Crematory of Bay City. Visitation for Carl will be at the church on Sunday. Beginning at 11 am until time of services at 1pm. Following the mass, a memorial celebrating the life of Carl will take place at the St. Anthony Hall, followed with a luncheon. Arrangements are being handled by the Ramsey Funeral Home of Harbor Beach. Memories can be shared at www.RamseyFH.com

CARL ROGGENBUCK, age 80 of Port Hope, passed away Friday, August 07, 2015 at Courtney Manor Nursing Center of Bad Axe. He was born on January 10, 1935 in Harbor Beach to the late Leo and Clara (Booms) Roggenbuck. Carl served in the US Army... View Obituary & Service Information

The family of Carl Roggenbuck created this Life Tributes page to make it easy to share your memories.

Send flowers to the Roggenbuck family.