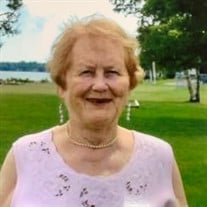 CAROL L. WESSELS, age 82 of Harbor Beach, passed away Saturday, February 1, 2020 in Harbor Beach, under hospice care. She was born on May 3, 1937 in Harbor Beach to the late Thomas and Ollie (Ahrens) Scott. Carol graduated from Harbor Beach High School and attended business school in Port Huron and started working at Michigan Bell in Detroit. Carol and George Wessels were united in marriage on May 11, 1957 in Harbor Beach, and had 4 children. In 1968 they returned to Huron County and raised their family near Harbor Beach. George preceded her in death on January 7, 2007. Carol received her LPN nursing degree at age 40 and worked n the Long Term Care Unit before completing her career at the Medical Clinic. She and George enjoyed being members of the Port Hope Square Dancers and being on a float, dancing through parades at many summer festivals around Michigan. She enjoyed her grandchildren, gardening, many different crafts,driving her camaro to antique car shows, playing cards and cribbage. Carol was a member of Zion Lutheran Church, the American Legion Auxiliary of Harbor Beach, and the Harbor Beach Conservation Club. Carol is survived by her children George Wessels of Harbor Beach, Scott (Lorene) Wessels of Harbor Beach, David Wessels of Harbor Beach, and Lynn Molter of Harbor Beach, 9 grandchildren, 11 great grandchildren, one great grandchild is on the way, her sister Marlene King of Millcreek, WA, her brother Robert (Cathy) Scott of Troy, and her sisters-in-law: Donna Wessels of Bad Axe, Jean Schember of Sandusky, Sharon Elliott of Detroit, and several nieces and nephews. She was preceded in death by her husband George, her parents, her brother William (Marilyn) Scott, mother and father-in-law: George & Tillie Wessels, sisters-in-law: Patricia (Jim) Miller Wanda (Warren) Rysberg, Kathryn (Tom) Brinker, Erich Wessels Funeral Services for Carol will be Wednesday, February 5, 2020 at 1pm at Zion Lutheran Church. Burial will follow in Rock Falls Cemetery. Visitation for Carol will be on Tuesday, from 2-8pm at the Ramsey Funeral Home of Harbor Beach. Visitation on Wednesday will be at the church beginning at 12 pm until time of services at 1pm. Memorials can be given to Zion Lutheran Church or the Harbor Beach Conservation Club. Memories can be shared at www.RamseyFH.com

CAROL L. WESSELS, age 82 of Harbor Beach, passed away Saturday, February 1, 2020 in Harbor Beach, under hospice care. She was born on May 3, 1937 in Harbor Beach to the late Thomas and Ollie (Ahrens) Scott. Carol graduated from Harbor Beach... View Obituary & Service Information

The family of Carol Wessels created this Life Tributes page to make it easy to share your memories.

Send flowers to the Wessels family.