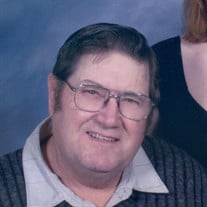 CHARLES E. HALIFAX, age 79 of Minden City, passed away Thursday, October 1, 2020 at Lakeview Extended Care and Rehab Center of the Harbor Beach Community Hospital. He was born on July 19, 1941 in Minden City to the late William & Irene Halifax. Charles and Barbara Jean Gentner were united in marriage on May 13, 1978. Charles worked at Michigan Peat Moss for 45 years, he always helped farmers wherever he was needed, and Malcome Williams for 3 years. He loved visiting family and never missed a family gathering or event, unless he was sick. Charlie was an avid deer hunter, and after retiring he had to take his daily 2 or 3 trips to Minden City to have coffee with his friends, and sometimes lunch too. If anyone wanted to know any family history, all they had to do was call Charlie. Charlie was a member of the Minden City Methodist Church, and served on several committees, and always took care of the element for Communion Sunday’s. He adored his 3 granddaughters; buying or giving them anything they wanted. He had so much love to give doing whatever he could for others. Charles is survived by his wife Barbara Halifax of Minden City, daughter Lisa (Tommy) Michalski of Harbor Beach, grandchildren: Abigail, Breanna and Hailey Michalski, sisters: Betty Smith, Jean Wilson, Mary Lou (Hoffman) Kramer, Carol (Michael) Ireland, brothers: John (Mary) Halifax, Robert Halifax, sisters-in-law: Paula (Sue) Halifax, Linda Halifax, Violet (Halifax) Darling, along with several nieces and nephews. He was preceded in death by his brothers: Ralph (Stella & June) Halifax, Howard (Virginia) Halifax, Gerald Halifax, Gordon (Rhea) Halifax, William Halifax, Jr., Richard Halifax, sisters: Helen (Art) Winkel, Ruth Ann Halifax, Marjorie Halifax, brothers-in-law: Krestyn Smith, Erwin (Wayne) Wilson, Floyd Hoffman, Gerald Kramer, sister-in-law Bernadine Halifax and several nieces and nephews. Funeral Services for Charles will be Monday, October 5, 2020 at 2 pm at the Ramsey Funeral Home of Harbor Beach, with Rev. Sari Brown officiating. Burial will follow at Ruth Sts. Peter and Paul Church Cemetery. Visitation for Charles will begin on Monday at 10 am until time of services at 2 pm. Memories can be shared at www.RamseyFH.com

The family of Charles E. Halifax created this Life Tributes page to make it easy to share your memories.

Send flowers to the Halifax family.