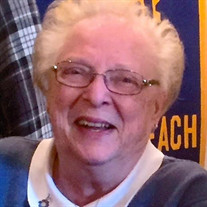 Clarann Holdwick, age 77 of Harbor Beach, Michigan passed away Thursday November 9, 2017 at her home with her loving family by her side under hospice care. She was born on August 11, 1940 in Ruth, Michigan, to the late Norbert and Mary Kramer. Clarann enjoyed doing craft projects and going to craft shows. She also liked to crochet, play cards (especially bridge) and belonged to several bridge clubs. She was a member of the Red Hat Society, the Harbor Beach Garden Club and enjoyed attending the Town Hall programs in Port Huron. Clarann and Roman were united in marriage on November 15, 1958 in Sts. Peter and Paul Catholic Church in Ruth, Michigan where she was a parishioner. Clarann is survived by her husband, Roman Holdwick, Harbor Beach, and two sons: Henry Holdwick and his wife Deanna of Harbor Beach, and Michael Holdwick of Harbor Beach; Four grandchildren: Theresa (Aaron) Wolschleger, Matthew (Rebecca) Holdwick, Andrew Holdwick, Stephanie Holdwick and her fiancé Anthony Gusa; seven great grandchildren. She is also survived by: a sister, Joan Maurer,Harbor Beach; a brother, Lloyd Kramer and his wife Sherry of Harbor Beach; stepmother, Roseann Kramer of Harbor Beach; brother–in-law Joe Holdwick and his wife Lorraine of Ruth, Michigan; and sister-in-law Magdeline Stacer of Ruth, Michigan. She was preceded in death by a son, Christopher William Holdwick; brothers-in-law Robert Holdwick and Leo Holdwick; and sisters-in-law Loretta Stacer and Lenora Krups. Funeral Services will be Monday, November 13, 2017 at 11:00am at Sts. Peter and Paul Catholic Church of the Holy Apostles Parish in Ruth, Michigan with Father Christopher Coman officiating. Burial will follow in the church cemetery. Visitation will be Sunday, November 12, 2017 from 2:00pm until 8:00pm at the Ramsey Funeral Home in Harbor Beach, Michigan. A Parish Vigil Service will be Sunday at 7:00pm. Visitation on Monday will be at Ruth Sts. Peter and Paul Church from 10:00am until the time of services at 11:00am. Memorials may be given to A&D Hospice or Relay for Life.

Clarann Holdwick, age 77 of Harbor Beach, Michigan passed away Thursday November 9, 2017 at her home with her loving family by her side under hospice care. She was born on August 11, 1940 in Ruth, Michigan, to the late Norbert and Mary Kramer.... View Obituary & Service Information

The family of Clarann Holdwick created this Life Tributes page to make it easy to share your memories.

Send flowers to the Holdwick family.