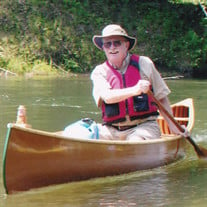 Donald “Hugh” Clark passed away on Saturday, June 10, 2017, at the age of 82. He was born in Livonia, MI. Hugh was preceded in death by his wife, Joleen, his parents Donald and Ruth and his sister, Susan (Clark) McNamee. His is survived by his son, Donald (Lynne) Clark, Valerie (Bruce) Gerhart and Kathy (Warren) Richter; along with seven grandchildren, Will, Allison and Lindsey Clark, Jennifer and Paul Gerhart, Clark (Anna Goldberg) and Lee Richter, and one great granddaughter, Sadie Joleen Goldberg Richter. Hugh was a wonderful father and grandfather (Papa). He created a lasting influence on the interests and vocations of his children and grandchildren, as they continue his legacy of love for nature, science, the environment and canoeing. Hugh was a science teacher for 39 years at Harbor Beach High School and took special delight in bringing his students a weekly taste of nature, having Euell Gibbons days each Friday. He earned the rank of Eagle Scout as a youth and was a Scout leader for 35 years, taking hundreds of young men on wilderness adventures and nurturing a love and respect for the outdoors. For his distinguished service to Scouting, he was bestowed the Silver Beaver Award. He wrote for decades a weekly article for the Harbor Beach Times called "Talk for the Table" and he was a proud graduate of Michigan State College, having marched in the 1954 Rose Bowl parade. Hugh was a member of the Wooden Canoe Heritage Association, where he and Joleen developed deep friendships with fellow canoeists from around the country. He was also a master woodcarver who did thousands of basswood carvings never for personal or financial gain but for the pure joy of giving them away to relatives, friends and strangers. We are certain that many of the people reading this will feel a smile on their face because they have one or many of his carvings in their home. In lieu of a memorial service, his children and grandchildren will hold a private memorial at a later date at Superior Provincial Park’s Mijinemungshing Lake, which was a treasured canoeing area for Hugh and Joleen. Memorials may be sent to the Harbor Beach Lighthouse Preservation Society, the Harbor Beach United Methodist Church, or to the donor’s choice. “Paddle on Papa.”

The family of D. Hugh Clark created this Life Tributes page to make it easy to share your memories.

Send flowers to the Clark family.