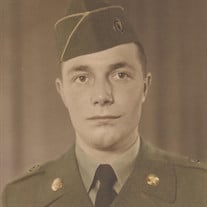 David J. Kramer, age 85 of Sherman Township near Harbor Beach, passed away Thursday, September 28, 2017 in Covenant Medical Center in Saginaw, Michigan. He was born on September 7, 1932 in Sand Beach Township, son of the late Raymond and Stella (Holdwick) Kramer. David and Janet Messing were united in marriage on October 4, 1958 in Helena, Michigan. He was a member of St Anthony Church (Helena) of the Holy Name of Mary Parish of Harbor Beach, where he was a lector for over 50 years. David was also a member of the Parisville VFW, St Anthony’s Men’s Club, Knights of Columbus-Ruth Council and was a former Grand Knight. He was a veteran of the United States Army and served during the Korean Conflict. David enjoyed listening and dancing to polka music, history, going to vintage farm implement shows and recently attended the Gathering of the Orange. He also enjoyed his family and especially his grandchildren and great-grandchildren. David is survived by wife Janet of Harbor Beach and four sons, Terry Kramer and his wife Connie of Harbor Beach, Glen Kramer of Oak Park, Illinois, Kevin Kramer and his wife Michelle of Novi, Michigan and Darren Kramer and his wife Laurée of Gladstone, Michigan; grandchildren, Kristin (Charlie) Rawlings, Ryan (Dannia) Kramer, Jenna (Justin) Gentner, Keith Kramer, Jordan Kramer, Lindsey Kramer, and Zoey Kramer; great-grandchildren, Derek Kramer, Rylee Rawlings, Brynn Rawlings, Reagan Rawlings and Brielle Gentner. Also surviving are David’s siblings, James Kramer of Harbor Beach, Sylvia Sporman and her husband Bob of Bay City, Melvin (“Cass”) Kramer of Harbor Beach, Harvey Kramer and his wife Mary Lee of Ortonville, Michigan, Pauline Boks and her husband Ray of Bay City and Carla Hoot and her husband Ken of Midland. David was preceded in death by a sister-in-law, Stella Kramer; also brother-in-law and sister-in-law Melvin and Nancy Messing. A funeral mass will be held Monday, October 2, 2017 at 11am in St Anthony’s Church in Helena of Holy Name of Mary Parish with Father George Amos officiating. Burial will follow in St. Anthony Catholic Cemetery with military honors provided by the Parisville VFW post and Harbor Beach American Legion. Visitation will be Sunday, 2-8pm at the Ramsey Funeral Home of Harbor Beach, where a joint rosary of the Men’s Club and Knights of Columbus will be held at 6pm on Sunday and a Parish Vigil service at 7pm on Sunday, both in the funeral home. Visitation will also take place at St Anthony's on Monday from 10am until the time of service at 11am. In lieu of flowers, donations may be given to the Capuchin Retreat Center, Washington, MI; OLLH Catholic School of Harbor Beach; or Mass Intentions at Holy Name of Mary Parish-St. Anthony's. Memories may be shared at www.ramseyFH.com.

The family of David J Kramer created this Life Tributes page to make it easy to share your memories.