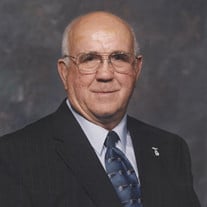 DENNIS J. STACER, SR., age 82 of Harbor Beach, passed away Wednesday, March 22, 2017 at Huron Medical Center of Bad Axe, with his family by his side, under hospice care. He was born on April 8, 1934 in Sherman Township, to the late Simon and Louise (Campbell) Stacer. He and Madelyn Elliott, were united in marriage on September 9, 1961 at Our Lady of Lake Huron Catholic Church in Harbor Beach. Dennis farmed his entire life. Dennis was a member of Our Lady of Lake Huron Catholic Church, of the Holy Name of Mary Parish, a member of the Knights of Columbus #11432 of Harbor Beach, and a fourth degree member of Bishop Babcock Knight of Columbus of Bad Axe, a member of the Grindstone Port Hope Sportsmen Club, a Life Member of National Farmers Organization, the Port Hope Retirees, the Bad Axe Retirees, Men’s Club, Usher, Reader and Eucharistic Minister for Church. He loved to travel, listen to polka music and play cards. He is survived by his love of his life of 55 years: Madelyn Stacer of Harbor Beach, and children: Dennis Stacer Jr. and his wife Constance, of Sandusky, and children: Dennis III (Heather) and Connie, Carol Stacer of Harbor Beach and son Justin, Michael Stacer and his wife Liz of Sandusky and children: Nathen (Jamie), Jessica, Daniel, Christopher, Mark Stacer and special friend Dawn of Harbor Beach, with children Cody, Duane Stacer and his wife Darlene of Wales, and children: Natalie, Nicole, Josh, Diane DeForge and her husband Derrick of Pompano Beach, Florida and children: Isabella, Daniel Stacer and his wife Danielle of Bad Axe, Peggy Mees and her husband Mark of Jackson, and children: Kali, Elli, and Matthew Stacer of harbor Beach, 3 great grandchildren: Lakyn, Grace and Ava, his sister Jean (Melvin) Zurek of Harbor Beach, brother: Calvin (Judy) Stacer of Harbor Beach, sisters-in-law: Margaret Apley, Arlene Kanaski and Donna Poppeck all of Bad Axe, brother-in-law Leroy and Pat Elliott of Bad Axe, and Brothers and sister-in-law: Russell Ginther of Bad Axe, Bruce Ginther of Bad Axe, and Connie Ginther of Ubly. Dennis was preceded in death by his sisters and brothers-in-law: Thelma & Ray Browski, and Phyllis & Richard Ross, and brothers-in-law: Allen Apley, John Kanaski, Dennis Poppeck and Clarence Elliott. Funeral Mass for Dennis will be Tuesday, March 28, 2017 at 11:30 am at Our Lady of Lake Huron Catholic Church, of the Holy Name of Mary Parish, with of Fr. Don Eppenbrock officiating. Burial will follow in the OLLH Church Cemetery. Visitation will be Monday, March 27, 2017 from 2-8pm at the Ramsey Funeral Home of Harbor Beach. Visitation on Tuesday will be at the church beginning at 10 am until time of services at 11:30 am. A Parish Vigil Service will take place Monday at 7 pm. The Daughters of Isabella will have a Rosary Service, Monday at 4pm, and the Knights of Columbus will have a Rosary Service, Monday at 6:30 pm, in the funeral home. Memorials may be given to the Family Discretionary Fund. Memories can be shared at www.RamseyFH.com

DENNIS J. STACER, SR., age 82 of Harbor Beach, passed away Wednesday, March 22, 2017 at Huron Medical Center of Bad Axe, with his family by his side, under hospice care. He was born on April 8, 1934 in Sherman Township, to the late Simon and... View Obituary & Service Information

The family of Dennis J. Stacer Sr. created this Life Tributes page to make it easy to share your memories.

Send flowers to the Stacer family.