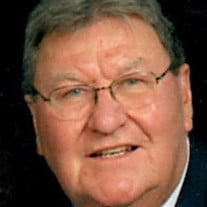 Donald S. Iseler, age 86 of Maple City, formerly of Harbor Beach, passed away Saturday, August 5, 2017, at Munson Medical Center in Traverse City. He was born on June 23, 1931 in Caro to the late Jacob and Catherine (McLennan) Iseler. Don served honorably in Korea for the US Army during the Korean War. Don and Marjorie Zellman were united in marriage on June 16, 1956, in Harbor Beach. Don graduated from Harbor Beach Community Schools in 1949, Flint Junior College, and then Central Michigan University in 1960. He also studied at the University of Michigan Banking School and the University of Wisconsin Banking School. Don worked for Huron County Bank, First of America Bank and Chemical Bank, all in Harbor Beach, from 1960 to 1994. He retired from Chemical Bank as senior vice president in 1994. Don was an active member of the community before his retirement. He was a former member and treasurer of First Presbyterian Church in Harbor Beach, and was a member of St. Andrew's Presbyterian Church of Beulah. He was a former president and secretary of the Harbor Beach Lions Club, and was a member of the Jaycees, Chamber of Commerce, American Legion (former commander), Dance Club, Men's Civic Chorus, and was a Master Mason. Don was on the Harbor Beach School Board during the 1960s, treasurer of the student loan fund, former president of the Harbor Beach Alumni Association, and was treasurer of the Murphy Museum Foundation. Don is survived by his wife, Marjorie of Maple City; children James Iseler and his wife Vicki of Horton, Robert Iseler and his wife Judy Evola of Highland, and Catherine Anthony and her husband Andrew of Empire; grandchildren Shelby Iseler, Maxwell Iseler, Amelia Anthony and Margaret Anthony; and his brother, James Iseler of St. Clair Shores. He was preceded in death by a sister-in-law, Jeanne Iseler. Cremation has taken place. Visitation will be at 1 p.m. and a memorial service at 2 p.m. on Saturday, Aug. 26, at First Presbyterian Church of Harbor Beach. Military honors will be given by the American Legion. Memorials may be offered to the First Presbyterian Church of Harbor Beach, the St. Andrew's Presbyterian Church (Beulah, MI) Building Fund, or the Harbor Beach Lighthouse Preservation Society. Arrangements are being handled by the Ramsey Funeral Home of Harbor Beach.

The family of Donald S. Iseler created this Life Tributes page to make it easy to share your memories.

Send flowers to the Iseler family.