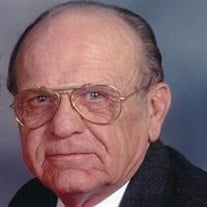 Donald Frederick Thoms, known to all as “Yoge”, passed away peacefully on Saturday, February 24, 2018 at the age of 79, just 19 days shy of his 80th birthday. He was a resident of Clinton Township, Michigan. “Yoge” was born March 15, 1938 in Port Hope, Michigan to the late Samuel Gustav Alex and Emma Kuschel Thoms. On January 7, 1967, in Port Huron, Michigan he was united in marriage to the former Charlene L. Bubel. Together they celebrated their 51st Wedding Anniversary. He was a 1956 graduate of Port Hope High School. After proudly serving in the United States Army and return to civilian life, he was employed as a hydraulic crane operator for 44 years and was a member of the Operating Engineers Local 324. He was a member of the Moose Lodge in St. Clair Shores, Fraternal Order of Eagles in Harrison Township, Port Hope AmVets and the American Legion Post # 4 in Mount Clemens. He loved socializing with the friends he made at the clubs he belonged to. He was also a member of St. Luke Lutheran Church in Clinton Township. Fond memories were shared with his family as they enjoyed time together on his farm located in Port Hope and the location of his father’s birth. He is survived by his wife of 51 years, Charlene, his children Scot (Kelley) Thoms, Steven (Hannah) Thoms and Rebecca (Michael) Parnell. He was the proud grandfather of Mitchell, Emma, Abby, Breanna, Alexa and Nathan. He is also survived by his sister Mable Sommers. Beside his parents, he was preceded in death by brothers, Lawrence, Russell, Kenneth and Erv. Visitation will be held on Friday, March 2, 2018 from 2:00 pm until 8:00 pm in the Harold W. Vick Funeral Home, 140 South Main, Mount Clemens. Additional visitation and services will be held on Saturday, March 3, 2018 from 11:00 am until 2:00 pm the time of services at Ramsey Funeral Home, 425 State Street, Harbor Beach, MI. Burial with military honors will be held at Forest Bay Cemetery, Rubicon Township, Michigan

The family of Donald F. Thoms created this Life Tributes page to make it easy to share your memories.

Donald Frederick Thoms, known to all as “Yoge”, passed away peacefully...

Send flowers to the Thoms family.