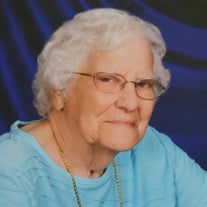 Dora D. Pleiness-Collison, age 93 of Port Hope, passed away Tuesday, March 27, 2018 at Gulfside Hospice in Zephyrhills, Florida. She was born on March 26, 1925 in Marysville, to the late Frank and Mae (Merchant) Koglin. Dora worked 5 years at Unell Manufacturing before staying home. Dora and Herman E. Pleiness were united in marriage on May 15, 1943. He preceded her in death on June 8, 1982. Dora and Delbert Collison were united in marriage on August 22, 1992. He preceded her in death on December 28, 2013. Dora was a member of St. John Lutheran Church in Port Hope, a member of the Ladies Aide, the Port Hope and Kinde Retirees. She enjoyed painting, crocheting, gardening flowers, and doing puzzles. She is survived by her children: Herman “Butch” (Marilyn) Pleiness of Brighton, Leroy Pleiness of Port Hope, Carol (Jim) Hunter of Port Hope, Richard (Mary Jane) Pleiness of Davison, Rodney (Sherri) Pleiness of Brighton, 6 grandchildren: Mark Craig, Todd, Lori, Lisa, Amy, 8 great grandchildren, 2 step children: Sandy COppo of Southgate, and Linda (Bob) Jehle of Algonac, 2 step grandchildren: Carrie and Patrick, 1 brother Fred (Bernice) Koglin of Port Hope, and one sister Marlene Martinez of Harbor Beach. Dora was preceded in death by her siblings: Rosena Kelly, Frank Koglin, Albert Koglin, Alfred Koglin, Lena Sengstock and Gloria Western. Funeral Services for Dora will be Tuesday, April 3, 2018 at 11 am at St. John Lutheran Church of Port Hope, with Rev. David Dodge officiating. Burial will follow in Lakeview Cemetery. Visitation for Dora will be on Monday, from 4-8 pm at the Ramsey Funeral Home of Harbor Beach. Visitation on Tuesday will be at the church beginning at 10 am until time of services at 11 am. A Scripture service will take place at 7 pm on Monday at the funeral home. Memorials may be given to the St. John Lutheran Church Stained Glass Fund, or the Eastern Huron Ambulance Service of Harbor Beach. Memories can be shared at www.RamseyFH.com

The family of Dora D. Pleiness-Collison created this Life Tributes page to make it easy to share your memories.

Send flowers to the Pleiness-Collison family.