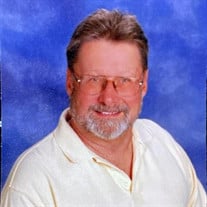 Douglas Frank Grekowicz of Harbor Beach joined his savior, Jesus Christ, on May 19, 2021 at his home. He was a parishioner of Our Lady of Lake Huron Catholic Church, and had retired from AT&T. His wish was to have his bed placed near the window so he could look out into the backyard and see the hummingbirds and squirrels he had befriended. He also enjoyed watching the fire in his patio fireplace. Doug honorably served his country on the USS Noxubee AOG-56, a naval fuel barge which delivered AvGas and other fuels to the demilitarized zone. He was known as a “Radar Rat” during his two tours in Vietnam. His heroism and service extended far beyond his military service. Known as Robin Hood, Doug was always prepared to come to the rescue of people in distress. Doug was an avid outdoorsman. He loved to be in nature: hunting, fishing, cutting wood, observing animals and birds, and camping. He passed this love of nature to his children and grandchildren. He especially enjoyed deer camp in Standish. He was an amazing storyteller whose tales enraptured anyone who was fortunate enough to hear them. Doug’s great love story began when Doug met Marilyn on leave from the navy. They were married on the 13 of June 1970. Doug and Marilyn had four children: Eric (Rachel), Leah Rogers (Steve), Kelly Ammann (Dave), and Barbara Siemen (Darrin). Doug was an active member of the Thumb EZ Riders Bicycle Club, the Royal Order of the Moose, the American Legion post 197, Thumb Veterans Organization, and the Veterans of Foreign Wars. He was also a past president of the Ubly Fox Hunters. Doug was preceded in death by his father, William Grekowicz, and he is survived by his wife (Marilyn), his mother (Colette), and his four children (Eric, Leah, Kelly, and Barbara). Doug and Marilyn have fourteen grandchildren (Eric: Maria Dallo (Joseph), Douglas, Veronika, and Theresa), (Leah: Brittnee, Stephen, Sydney), (Kelly: Gretchen, Sean, William, Lucas), (Barbara: Elliott, Adrienne, Riley). They also have 3 great-grandchildren: Evelyn Dallo, Felicity Dallo, and Casey Rogers. He is also survived by his seven siblings: Connie, Randy (Fia), Carol Colotti (Mike), Luann Thompson (Gene), Denise Puvalowski (Claude), Gerald (Mary), and Tom (Jodi). Mass of Christian burial held at OLLH Catholic Church on Tuesday, May 25, 2021 at 11:00am. Visitation will be held at 10:00am prior to the mass. Arrangements are being handled by the Ramsey Funeral Home of Harbor Beach. In lieu of flowers, please consider donating to the America Legion post 197, Harbor Beach, Michigan Memories can be shared at www.RamseyFH.com

Douglas Frank Grekowicz of Harbor Beach joined his savior, Jesus Christ, on May 19, 2021 at his home. He was a parishioner of Our Lady of Lake Huron Catholic Church, and had retired from AT&T. His wish was to have his bed placed near the window... View Obituary & Service Information

The family of Douglas F. Grekowicz created this Life Tributes page to make it easy to share your memories.

Send flowers to the Grekowicz family.