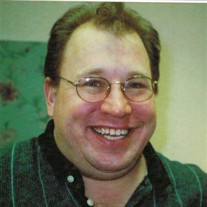 Duane John Messing, age 47 of Tacoma, Washington passed away unexpectedly on Monday, December 22, 2014 at St. Joseph’s Medical Center in Tacoma, Washington. He was born on June 19, 1967 in Harbor Beach hospital to John and Peggy Messing. Duane had a love of cooking from early on in his life; starting at the age of 14 he began working at the former Nunneley’s Roadhouse. He was a 1985 graduate of Harbor Beach High School. From there he went on to St. Clair Community College and then to The Culinary School of Kendall College in Evanston, Illinois, where he graduated with his culinary degree. Duane then traveled to Seattle, Washington where he worked at O’Sheas Catering as the executive chef also as a sous chef at Emerald Queen Casino and Hotel in Tacoma, Washington. Duane is survived by his parents, John and Peggy Messing of Harbor Beach, two sons; Noah and Sam Messing of Tacoma, Washington, three sisters; Pam and John Will of Harbor Beach, Denise Morell and special friend Keith Maurer of Bad Axe, Dawn and Kevin Pleiness of Harbor Beach, six nieces and nephews; Natasha (Austin) Bancroft, Cory Will, Kayla and Tyler Morell, and Hunter and Brooklyn Pleiness, and his godparents; Roy and Evelyn Stein of Harbor Beach. He is preceded in death by his grandparents, Ray and Bertha Messing and Charles and Hazel Kanaby. Cremation has taken place and a memorial service will be help 12pm on Saturday, January 10, 2015 at Holy Apostles Church Ruth, Michigan gathering will be from 10am-12pm at the church. Memorials may be offered to the Family Discretionary Fund. Arrangements are being handled by the Ramsey Funeral Home of Harbor Beach. Condolences can be shared at www.RamseyFH.com

The family of Duane John Messing created this Life Tributes page to make it easy to share your memories.

Send flowers to the Messing family.