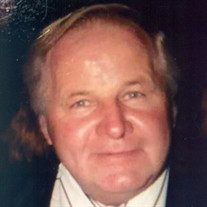 Edwin (Special Ed) Gerstenschlager, age 79, of Harbor Beach, entered God’s Kingdom on Friday, October 11, 2019 while at Courtney Manor of Bad Axe. He was born on September 18, 1940 to the late Carl and Louise (Inhelder) Gerstenschlager. He and Audrey Capling were joined in marriage on September 22, 1962 at Zion Lutheran Church of Harbor Beach where he served as a trustee, a member of the choir, and took part in the Easter Cantata. He was very proud to be one of the original founders of the now famous German Dinner at Zion Lutheran Church. Edwin graduated from Harbor Beach High School in 1958 and worked as an equipment operator for his family business. Later he was hired as a crane operator for the county. In 1968 Edwin was hired by Detroit Edison to be a heavy equipment operator at their new power plant in Harbor Beach from which he retired 32 years later in the year 2000. Edwin was a long time member of the Harbor Beach Lions Club and Country Western Dance Club. He was always willing to lend a hand. He loved his family and friends, sitting around camp fires, hay rides, reunions, karaoke, dancing, woodworking, pot lucks, socializing, and collecting. He was also a great welder. He loved machines, of which he had many. His favorite was his red grader, which was his fathers. Ed’s skill with heavy equipment was well known. He is survived by his wife of 57 years, Audrey, two sons, Bradley Gerstenschlager of Virginia Beach, Virginia and Jeffrey Gerstenschlager of Harbor Beach, one daughter, Sonja Smaglinski of Harbor Beach, six grandchildren; Amber, Maranda, Brent and Heath Gerstenschlager and Nathan and Vincent Smaglinski, one great-grandson Trenton Stevens, his brother Carl Gerstenschlager of Harbor Beach, two sisters: Joyce Krueger of Colorado, Donna Landenberg of Harbor Beach, and sister-in-law Myra Gerstenslager of Caseville. Edwin was preceded in death by his parents Carl & Louise Gerstenschlager a brother, Lloyd Gerstenschlager, sister and brother-in-law Elmer & Betty Neischolz, sister-in-law Betty Gerstenschlager, and brother-in-law Ralph Landenberg. Funeral service for Edwin will take place on Thursday, October 17, 2019 at 1:00 pm at Zion Lutheran Church with Rev. Ron Schultz officiating. Burial will follow at Rock Falls Cemetery. Visitation will be held at Ramsey Funeral Home of Harbor Beach on Wednesday, October 16, 2019 from 2:00-8:00pm with a scripture service at 6:30 pm. Visitation on Thursday will be at the church starting at 12:00 pm until time of services at 1:00 pm. Memories may be shared at RamseyFH.com

The family of Edwin A. Gerstenschlager created this Life Tributes page to make it easy to share your memories.

Send flowers to the Gerstenschlager family.