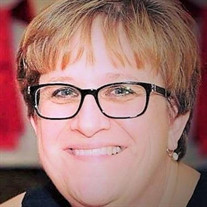 Elizabeth A. (Kubik) Manteuffel, age 53, of Center Line, MI., passed away peacefully April 14, 2021, surrounded by her family after a valiant seven-month fight with cancer. Beth was immensely proud of her big, close-knit family. She is survived by her dedicated husband Scott Manteuffel; loving parents Kathleen and Thomas DeGrazia; and siblings Michael Kubik; Andrew Kubik; Douglas and (Mandy) Kubik; Sarah Kubik; Kimberly (Eric) Adler; Kelly Oliver; Lisa (David) Iselli; and Tracy (James) Mannes; as well as loving father-in-law Alfred Manteuffel; sisters-in-law Kathi (George) Seidl; Kristin (Bill) Trewhella; and 28 beloved nieces and nephews, and eight great nieces and nephews. She was preceded in death by her father Dr. Clement Kubik, infant nephew Michael Kubik, mother-in-law Virginia Manteuffel, and brother-in-law Michael Manteuffel. Beth was born on June 3, 1967 to the late Dr. Clement Kubik and Kathleen (Whitmore) Kubik-DeGrazia in Harbor Beach, MI. The oldest of five children, Beth was a down-to-earth role model for her siblings growing up. A 1985 graduate of Harbor Beach High School, Beth went on to pursue a Bachelor of Arts degree from Aquinas College in 1989. Beth worked at Mercy Respite in Grand Rapids, which led her into directing The Latchkey Program for children with severe health challenges. In this role, Beth discovered her true calling was teaching so she went on to earn her Teaching Certification from Eastern Michigan University in 1997. She began her teaching career at Our Lady of Queen Angels in Detroit and over the next 20 plus years moved from the parochial to the charter schools where she held roles of increasing responsibility including leading the Social Studies Department at Eaton Academy in Eastpointe and teaching Social Studies and English in her final years at Bradford Academy in Southfield. Beth made a difference in the lives of hundreds of students. She would always say with pride and joy that her students were her children, building relationships that still last to this day. Beth married the love of her life Scott Manteuffel on July 5, 2003, and they enjoyed a beautiful 17-year marriage full of romance, laughter and fun-filled adventure that brought Beth so much joy. Scott is a fellow teacher and deeply devoted to Beth. Throughout their marriage their faith, humor and upbeat attitude fortified them and amazed those lucky enough to witness their powerful bond during challenging times. Beth had a rich and full life punctuated with love and appreciation for her family and friends. She never missed an opportunity to connect with those she loved, never forgetting to send a holiday, birthday, or anniversary card. She enjoyed her camping and casino trips, especially her annual Las Vegas trip with Scott. Beth was not afraid to challenge herself physically and mentally, a trait that served her well these last months. She competed in many bike races and even competed in the 5K Warrior Dash race to prove to herself she could overcome obstacles mud-soaked and all. She and Scott enjoyed daily walks with their dog Titan and Harbor Beach and Michigan State football games. During her hospital stays Beth would gladly banter with the staff about MSU’s athletic prowess wearing her “Go Green” sweatshirt. Visitation will be held Monday, April 19, from 3:00 –7:00 PM at Lynch & Son’s Funeral Home in Clawson, MI. A funeral Mass for Beth will be Tuesday, April 20, 2021 at 11:00 am at St. Malachy Catholic Church in Sterling Heights, MI. Memorial contributions may be made to the “Elizabeth Kubik Manteuffel Teacher Scholarship” fund at Huron County Community Foundation, or to a charity of your choice in Beth’s honor. Beth, may angels welcome you to paradise.

Elizabeth A. (Kubik) Manteuffel, age 53, of Center Line, MI., passed away peacefully April 14, 2021, surrounded by her family after a valiant seven-month fight with cancer. Beth was immensely proud of her big, close-knit family. She is survived... View Obituary & Service Information

The family of Elizabeth (Kubik) Manteuffel created this Life Tributes page to make it easy to share your memories.