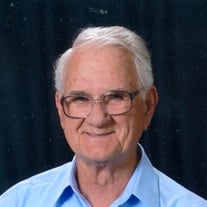 FRANCIS A. McGOWAN, age 90 of Port Hope, passed away Sunday, August 16, 2015 at Harbor Beach Community Hospital. He was born on July 27, 1925 to the late Joseph and Jane (Meehan) McGowan. Frank and Barbara Roggenbuck were united in marriage on June 20, 1953 in Detroit. Frank served in the US Marines. He served in the Pacific Theatre from August 28, 1943 to February 11, 1946 as a PFC in the 1st Battalion, 15th Marines, Sixth Marine Division in the Artillery. He fought in Guam, Marianas Islands, Okinawa, Ryuku Islands. He was also stationed in Tsingtao, China to repatriate Japanese soldiers following the war. Following the war, he received his GED from Cass Tech in Detroit and attended Wayne State University. He worked as a Sales Representative for many different advertising groups. Frank was part of the Detroit Round Table of Catholics, Jews and Protestants, a group focused on fostering religious and racial brotherhood. He also was active in the Detroit Irish Mafia, which was started by a group of UDM Law school graduates who shared similar backgrounds growing up during the Depression in poor Irish Catholic families. Frank was a man of deep and abiding faith who was proud of his family, his heritage and his country, Frank typified the “Greatest Generation.” Frank is survived by his wife of 62 years: Barbara McGowan of Port Hope, children: Michael (Kelly) McGowan of Ann Arbor, Jane McGowan Benskey of Brighton, Patrick McGowan of Howell, Thomas McGowan of Howell, Kathleen (Rob) Bandfield of Howell, 13 grandchildren: Ryan and Garret McGowan, Rachel (Cameron), Matthew and Michael Benskey; Erin (Tommy) McGlinnen and Megan (Dom) Hayes, Makailey (Isaac) deAlmeida, Kyle, Colin and James Roberts and Sam and Katy Bandfield, 7 great grandchildren: Patrick, Emily, Lilly and Finn McGlinnen, Brigit and Jona DeAlmeida and his namesake and newest great grandchild, Francis Michael Hayes. He was preceded in death by a daughter Brigit McGowan, sisters: Mary Theisen and Josie Brown, and his brother Hugh McGowan. Funeral Mass for Frank will be Friday, August 21, 2015 at 11 am at Our Lady of Lake Huron Catholic Church, of the Holy Name of Mary Parish, with Fr. William Spencer officiating. Cremation will follow. Internment will take place at the OLLH Church Cemetery. Visitation for Frank will be Thursday, from 2-8pm at the Ramsey Funeral Home of Harbor Beach. Visitation on Friday will be at the church beginning at 10 am until time of services at 11 am. A Parish Vigil Service will take place Thursday at 7 pm at the funeral home. A Knights of Columbus Rosary will be held at 6:30 pm on Thursday. Memorials can be given to the OLLH school. Memories can be shared at www.RamseyFH.com

FRANCIS A. McGOWAN, age 90 of Port Hope, passed away Sunday, August 16, 2015 at Harbor Beach Community Hospital. He was born on July 27, 1925 to the late Joseph and Jane (Meehan) McGowan. Frank and Barbara Roggenbuck were united in marriage... View Obituary & Service Information

The family of Francis A. McGowan created this Life Tributes page to make it easy to share your memories.

Send flowers to the McGowan family.