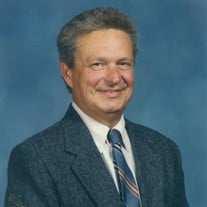 Frederick C. Ahrens, age 82 of Harbor Beach, passed away suddenly Wednesday, January 13, 2021 at Huron County Medical Care Facility. Fred was born on November 22, 1938 in Harbor Beach to the late Edward and Francis Ahrens. On July 1, 1967, Fred married the love of his life, Marjory C. Johnson. They celebrated 53 years of marriage. Marjory entered into eternity 41 days before Fred, December 3, 2020. They are now together forever. Fred attended Alma College on a basketball scholarship before entering the US Army. He proudly served his country in Germany before returning to marry Marjory. Together they raised two sons; Andrew and Kevin (Beth) Ahrens. Later he loved spending time with his grandchildren; Michael, Mason and Ryder. Before retiring and moving back to Harbor Beach from Essexville, Fred worked over 30 years as a State Highway Inspector. He later served as a Harbor Beach City Councilman. Through the years, he had many dogs including training Leader Dogs for the Blind. You could often see him walking his dog. Fred was an avid hunter and fisherman. He loved spending time with his sons, at the cabin deer hunting. He cherished those memories until the end. Watching Michigan State Basketball and football were also favorite past times. Fred loved “Happy Hour” at Hunter’s Bar. He will be long remembered for his cheerful personality. Also left to cherish his memory are his siblings: Diane (Willard) Messing, John (Barb) Ahrens, Jeff (Phyllis) Ahrens, and sisters/brothers-in-law: David (April) Johnson, Karen Johnson, Mary Ellen (Jack) Hessling, and Kathleen Frisbee. He was preceded in death by brother, Jamie Ahrens, and brother-in-law Bruce Johnson. He also had many special nieces and nephews. Fred was also preceded in death by his parents-in-law: Claire and Lucille Johnson. Fred & Marjory attended the First Presbyterian Church in Harbor Beach. Fred valued his daily devotion time. The family would like to express their appreciation to the entire staff of Huron County Medical Care Facility. Your love and care of Dad meant the world to us. Per Fred’s request, cremation has taken place. A Memorial service will take place Tuesday, January 19, 2021 at 11 am at the Ramsey Funeral Home of Harbor Beach. Visitation will begin at 10 am until time of services at 11 am. Internment will take place at Rock Falls Cemetery. Military honors will be given in honor of Fred. Memorials can be made out to Leader Dogs for the Blind. Memories can be shared at www.RamseyFH.com

The family of Frederick C. Ahrens created this Life Tributes page to make it easy to share your memories.

Send flowers to the Ahrens family.