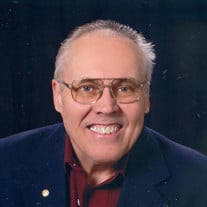 Gary Rose, age 74, died peacefully in his Harbor Beach home on Monday morning, January 20, 2020 after a long struggle with his health. His wife was at his side as he left his earthly body to be present with his Savior. He is already greatly missed by his family and friends in Washington State, Idaho, and here in Michigan. Gary Evan Rose was born July 18, 1945 to Gene and Virginia (Peterson) Rose in Kirkland, Washington. He was the second of their four children. Gary spent his boyhood outside as much as possible. He often shared memories of good times hunting, fishing, hiking, camping and climbing the mountains of his beautiful Washington state with his father and his siblings. Gary graduated from Lake Washington High School and soon joined the United States Army. He was proud to serve his country in Germany and other places. After the Army, he started working for the Bellevue School District driving delivery trucks and was employed by them until his retirement after more than thirty years. Gary raised two daughters, a son and a stepson with whom he shared his love of hunting, fishing, camping, and finding garage sale treasures. They all shared a love of many Seattle-based sports teams. Gary spoke with pride of his children often. Upon retirement, Gary moved to Michigan to be with his new wife, Nancy Lee, to whom he was devoted. They were blessed with twenty years together. He claimed her children and grandchildren as his own. They traveled extensively throughout the United States, returning many times to Washington to visit family. They also spent many winters oceanside in Myrtle Beach, South Carolina. They hosted many happy gatherings in their home for family and friends. Gary enjoyed his gardens, his lawns and feeding the birds. He belonged to the Harbor Beach post of the American Legion and the Caro chapter of the Knights of Columbus. He was proud of his two Labor Day walks across the Mackinac Bridge. Gary was a car guy, a history buff, a lover of the Bible, and a life-long learner. He always had a story, and he loved to share it. He could find common ground and converse with anyone. He was a person who never met a stranger and made many friends from coast to coast his whole life long. Gary is survived by his wife, Nancy (Fealko Learman) Rose; his daughter, Dawn Marie Rose of Redmond, WA; his daughter, Karisa Sam (Tim) of Bellevue, WA; his son, Kyle Rose of Redmond, WA; his stepson, Currin Cyr of Bellevue, WA; and his grandson, Evan B. Sam. He is also survived by his brother, Ron (Sherrie), and sister, Cheryl Rogers, as well as his brother-in-law, John Rogers, all from Coeur d’Alene, Idaho. Gary is also survived by his new Michigan family, Nancy’s many children and grandchildren. Gary was preceded in death by his parents, Gene and Virginia (Peterson) Rose and his brother, David Rose. Gary will be long remembered by those who loved him for his strong faith, his generosity, his sweet nature, and his ever-present smile. He would want us to think of him in the context of his often quoted, well loved verse from second Corinthians 5:8: “absent from the body, present with the Lord”. Family and friends will gather for Visitation at Ramsey Funeral Home in Harbor Beach on Thursday, January 23rd from 2 - 8 p.m. A prayer service will be held at 7 p.m. The funeral liturgy will be celebrated at Holy Name of Mary (OLLH) church in Harbor Beach on Friday, January 24th at 11:00 a.m. Fr. Adam Mahar will be the celebrant. There will be visitation at the church preceding the mass starting at 10 a.m. Memorials may be made to Holy Name of Mary Church, 413 S. First St., Harbor Beach, MI 48441 or Hunter Hospitality House, 1010 Lincoln Ave., Port Huron, MI 48060.

Gary Rose, age 74, died peacefully in his Harbor Beach home on Monday morning, January 20, 2020 after a long struggle with his health. His wife was at his side as he left his earthly body to be present with his Savior. He is already greatly... View Obituary & Service Information

The family of Gary E. Rose created this Life Tributes page to make it easy to share your memories.

Send flowers to the Rose family.