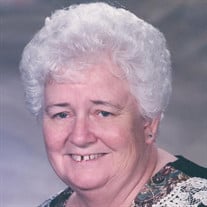 GERALDINE W. BOLDT, age 78, of Harbor Beach, passed away Wednesday, July 8, 2015 at Covenant Medical Center of Saginaw. She was born on August 4, 1936 in Port Huron to the late Merill & Helen (Bowman) Cronce. Geri and Clarence Boldt were united in marriage on November 20, 1954 in Harbor Beach. He preceded her in death on March 13, 2003. Geri was an active member of Zion Lutheran Church, where she was Assistant Financial Secretary and Sunday School Teacher and its Superintendant. She is a former employee of the Polewach Store, the Harbor Beach IGA, and the Harbor Beach Hospital Extended Care. She is survived by her children: Randy Boldt of Chickasha, Oklahoma, Cindy Sopczynski and her husband Mike of Harbor Beach, Bonnie Messing and her husband Dave of Harbor Beach, Patricia Alsop and her husband Dennis of Lakeport, and Judy Boldt and special friend Dan Wasierski of Ubly. 8 grandchildren: Mike and Allison, Rob and Rhonda, Jenny & Nathan, Pete and Kelli, Travis, Liz and Dan, Katie, and David and Donna, 13 great grandchildren, one sister Kay Sendegas of Auburn Hills, and step sister Annie Cronce of Algonac and step brother Merrill Cronce of Florida. Geri was preceded in death by 2 grandchildren: Andrew and Matthew Sopczynski, brother Rollin Cronce, and step brother Doug Cronce. Funeral Services for Geri will be Sunday, July 12, 2015 at 2pm at Zion Lutheran Church of Harbor Beach, with Rev. Richard Wilson officiating. Burial will follow in Rock Falls Cemetery. Visitation for Geri will be Saturday, from 2-8pm at the Ramsey Funeral Home of Harbor Beach. Visitation on Sunday will be at the church beginning at 1 pm until time of services at 2pm. Memorials can be given to the Zion Lutheran Church or School, and Harbor Beach Community Hospital Lakeview Extended Care and Rehab Center. Memories can be shared at www.RamseyFH.com

The family of Geraldine W. Boldt created this Life Tributes page to make it easy to share your memories.

Send flowers to the Boldt family.