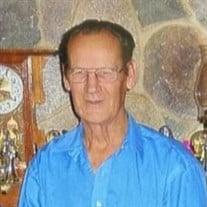 Gerhard W. Liebeskind, age 79 of Harbor Beach, passed away Wednesday, November 17, at his home, surrounded by his family, under hospice care. He was born on October 29, 1942 in Hanau, Germany to the late Otto and Elfriede (Satujezek) Liebeskind.... View Obituary & Service Information

The family of Gerhard W. Liebeskind created this Life Tributes page to make it easy to share your memories.

Send flowers to the Liebeskind family.