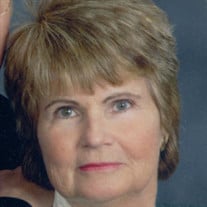 Gloria J. Schmaltz, age 76 of Port Hope, passed away Wednesday, September 30, 2020 at Harbor Beach Community Hospital. She was born on January 14, 1944 in Bad Axe to the late William and Dorothy (Carson) Perdue. Gloria and David Schmaltz were united in marriage in August of 1961 in Port Hope. Gloria earned a engineering degree, and was a retired employee of GM after 30 years at the Flint Assembly Plant. Gloria was a member of St. John Lutheran Church of Port Hope, the VFW of Burton, the AmVets of Port Hope, where she was a Life Member, was a tax assessor, level 2, was a former Huron Township Constable, and was a former member, for 50 years, of the Grindstone Port Hope Sportsmen Club. She was also a certified bowling instructor for children, a member of the Michigan Sheriff’s Association, and was involved in the Bobby Crim Walk in Flint. She is survived by her husband David Schmaltz of Port Hope, children: Betty (Greg) Burghardt of Clio, Rick (Jane) Schmaltz of Davison, 3 grandchildren: Justin (Brittany) Schmaltz, Brad Schmaltz and Jason (Bridget) Burghardt, 3 great grandchildren: Taylor, Emily, Christopher, siblings: Sally Scott of Iowa, Bob (Sharon) Perdue of Sterling Heights, Ernie (Debbie) Perdue of Burton, Nancy Reinke of Fenton, Janice Perdue of Port Hope, Janis Pleiness of Port Hope, Bill (Ellen) Perdue of Owendale, Sisters-in-law: Janet (Rodney) Weiss of Harbor Beach, Nancy (Ken) Osentoski of Port Hope, brother-in-law Howard (Lillian) Schmaltz of Genesee Twp, and many nieces and nephews. Gloria was preceded in death by her sisters: Doris Smith, Pat Braun, and brothers-in-law Ron Smith, Jim Scott, Wayne Reinke and Alan Pleiness. Funeral Service for Gloria will be Saturday, October 3, 2020 at 11 am at St. John Lutheran Church of Port Hope. Burial will follow in New River Cemetery. Visitation for Gloria will be on Friday, from 2-8pm at the Ramsey Funeral Home of Harbor Beach. Visitation on Saturday will be at the church beginning at 10 am until time of services at 11 am. An AmVets White Clover service will take place Friday at 7 pm in the funeral home. Memories can be shared at www.RamseyFH.com

The family of Gloria J. Schmaltz created this Life Tributes page to make it easy to share your memories.

Send flowers to the Schmaltz family.