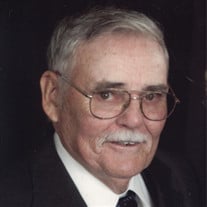 HAROLD JOHN (H.J.) McTAGGART, age 85 of Port Hope, passed away Monday, May 2, 2016, at Courtney Manor Nursing Center of Bad Axe, surrounded by his family. Harold was born December 28, 1930 at home in Sheridan Township, Bad Axe. He was the youngest son of the late Donald and Luetta (Gray) McTaggart. Harold graduated from Bad Axe high School in 1949. On May 5, 1951, he married Kathryn Ellen Woolner at the Nazarene Church in Gagetown. They would have celebrated 65 years of marriage. Harold started his working career in June of 1949, with the Bad Axe Grain Company. In 1956 he moved his family to Port Hope to be the manager of the Port Hope location of the Bad Axe Grain Company. In 1958 he founded H.J. McTaggart Trucking. He and his wife Kay founded Thumb Farm Service, Inc. in 1971 with grain elevators in Port Hope, Ruth and Ubly. Harold was a past trustee for the Village of Port Hope, a volunteer fireman for the Port Hope Fire Department, a member of the Port Hope Chamber of Commerce, the Port Hope Boat Club, the Port Hope Flying Club, the Grindstone-Port Hope Sportsmens Club, and the Port Hope United Methodist Church. He was an active member of the Verona Hills Golf Club from 1964 – 2001. He was a past member of the Michigan Agri-Business Association, and the Michigan Bean Shippers Association. He also loved being a member of the ROMEO breakfast club, and the morning coffee group in Port Hope. Harold and Kay traveled to Florida for 30 years, spending much of their time in Zephyrhills. Harold loved to hunt deer and turkeys in Michigan, and he went to Colorado Elk Hunting for 26 consecutive years. His greatest passion was collecting and restoring antique tractors, and at one time had 100 tractors in his collection. He also enjoyed instant lottery tickets, and trips to the casino. Harold is survived by his wife Kathryn, three children: Alan (Judy) McTaggart, Jean Norton and her special friend Jim Sabotka, and Debra (Jerome) Lackowski all of Port Hope. Six grandchildren; Lindsey (Greg) DeJonge of Zeeland, Mark (Amanda) McTaggart of Traverse City, Autumn Norton of Bay City, April (Nicholas) Osburn of Mount Pleasant, Thomas (Kate) Norton of Port Hope, and Alex Lackowski of Port Hope; six great-grandchildren: Fynlee DeJonge, henry DePottey, Carter & Charlotte OSburn, Michaella & Londyn Norton. One sister: Ellen Jean Maus of Bay City, one sister-in-law: Donna Woolner of Capac and several nieces, nephews and cousins. He was preceded in death by his parents, brothers: Neil and Donald McTaggart, brothers-in-law: Thomas Maus, Kenneth, James, Bernard, Alvin & Frank Woolner. Funeral Service for Harold will be Friday, May 6, 2016 at 11 am at the Ramsey Funeral Home of Harbor Beach, with Rev. Mark Ryan, Pastor of the Port Hope United Methodist Church officiating. Burial will follow in the New River Cemetery. Friends may call at the Ramsey Funeral Home on Thursday, from 1-8pm and on Friday beginning at 10 am until the time of services at 11 am. Memorials may be offered to the Friends of the Port Hope Depot, the Port Hope United Methodist Church, or to the donors choice. Memories can be shared at www.RamseyFH.com

HAROLD JOHN (H.J.) McTAGGART, age 85 of Port Hope, passed away Monday, May 2, 2016, at Courtney Manor Nursing Center of Bad Axe, surrounded by his family. Harold was born December 28, 1930 at home in Sheridan Township, Bad Axe. He was the youngest... View Obituary & Service Information

The family of Harold J. McTaggart created this Life Tributes page to make it easy to share your memories.

Send flowers to the McTaggart family.