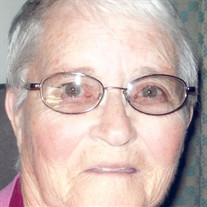 Harriet Witherspoon, 78, of Port Hope passed away peacefully on August 22, 2018 at Courtney Manor in Bad Axe under hospice care. Harriet Anna May Richardson was born November 13, 1939 in Portland, Oregon to Clarence and Hazel Richardson. Named for her benevolent uncle, Harry Tracey, who sponsored her mother and grandmother’s emigration from Denmark to Oregon in 1920, Harriet’s middle names came from her maternal and paternal grandmothers, respectively. Harriet and her family moved to Port Hope, Michigan in 1947 where she attended Port Hope Community School and met her husband, Richard. Rich and Harriet were united in marriage at St. John’s Lutheran Church in Port Hope on June 2, 1956 and shared 60 years together before his passing July 30, 2016. Harriet was a member of St. John’s throughout her life. Harriet was a school bus driver at Port Hope Community School for more than 25 years, a job she thoroughly enjoyed and reveled in doing; attending countless basketball, baseball, softball games, volleyball matches, track and field events and cross country meets, all while cheering on her beloved Bluestars. Hundreds of schoolchildren and young adults, through three generations, knew her simply as “Harriet.” She loved children, serving as a preschool aide and babysitting for many little ones over the years. Harriet was a member of the Port Hope Chamber of Commerce, where she served as president for many years, the organization’s first woman to hold the position. She loved and was proud of her “Little Town with the Big Welcome” and for numerous years served as a one-person tourist bureau with her home phone number listed for visitor information in travel publications. She also served as the village assessor for many years, and volunteered in countless other ways for the benefit of the community. A gifted conversationalist, Harriet enjoyed meeting new people and saw strangers as friends she hadn’t yet met. She enjoyed to travel and visited Hawaii, Germany and Alaska and for several consecutive years in the late seventies, early eighties, attended what was then known as “Fan Fair” in Nashville, Tennessee where she met and was photographed with many county music legends including Loretta Lynn, George Jones, Dolly Parton, Kenny Rogers, Ernest Tubb, Merle Haggard, Willie Nelson and virtually the entire cast of “Hee Haw.” She was particularly proud of her 1992 appearance on the nationally televised show “Nashville Now.” To paraphrase one of her favorite country songs of the era, Harriet was county, when country wasn’t cool. Harriet also enjoyed camping with Rich all over Michigan, and in later years, spending time at the family cabin in St. Helen where she enjoyed hosting friends and family and spent many hours fishing on the pontoon boat. Shortly after her 61st birthday in 2000, Harriet suffered a debilitating stroke that left her partially paralyzed and unable to speak. After months of therapy and hard work, she was able to walk again with assistance and talk in short sentences, although communication was extremely difficult from then on. Despite these challenges, with Rich’s loving care and assistance, Harriet persevered and remained active for the next 14 years, resuming to travel occasionally, take bus trips and spend winters with friends, old and new, in Zephyrhills, Florida. In 2014, after a series of health setbacks, Harriet took up residency at Courtney Manor in Bad Axe where she remained until her death. The family wishes to extend their upmost appreciation and thanks to the staff at Courtney Manor for the genuinely devoted, professional and adoring care for Harriet who, at her position in front of the nurses’ station, routinely served as hall monitor, alerting staff to any concerns with the behavior of her fellow residents. Rich and Harriet raised four boys, and they survive her: Calvin Witherspoon, of Roscommon; Duane (Cathy) Witherspoon of Rochester Hills; Chris (Jodi) Witherspoon of Clarkston; and Gregg (Gretchen) Witherspoon of Saginaw. Harriet was a doting and proud grandmother and great-grandmother who loved to show pictures of her grandchildren to everyone she encountered. Left to cherish her memory are her grandchildren Scott, Corey (Catie), Shawn, Darren, Drew, Bryce, Brenna, Madilyn and great-granddaughter Amelia. Also surviving is one brother, Ralph (Diana) Richardson of Snover; brother-in-law Robert Witherspoon of Port Hope; and four Sister-in-laws: Jean Weiss of Saginaw; Karen (Richard) Whitehead of Atlanta, Georgia; Diane (Dale) Reinke of Sandusky; and Penny Richardson of Saginaw. Harriet is also survived by numerous nieces and nephews. She was preceded in death by one brother, Alvin Richardson of Saginaw and several brother-in-laws and sister-in-laws. Funeral Service for Harriet will be Monday, August 27, 2018 at 11 am at St. John Lutheran Church of Port Hope, with Rev. David Dodge officiating. Burial will follow in New River Cemetery. Visitation for Harriet will on Sunday, from 2-8pm at the Ramsey Funeral Home of Harbor Beach. Visitation on Monday will be at the church, beginning at 10 am until time of services at 11 am. Memorial donations may be made to St. John’s Lutheran Church or the American Cancer Society. Memories can be shared at www.RamseyFH.com

The family of Harriet Witherspoon created this Life Tributes page to make it easy to share your memories.