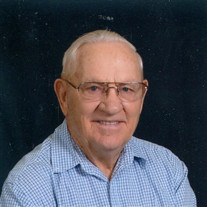 HARRY J. SIEMEN, age 86 of Harbor Beach, passed away Monday, March 2, 2015, at Covenant Medical Center of Saginaw. He was born on April 4, 1928, in Harbor Beach to the late Anthony and Mary (Gusa) Siemen. Harry Served in the US Army during the Korean Conflict. He and Patsy Wohlford were united in marriage on June 11, 1955, at Our Lady of Lake Huron Catholic Church of Harbor Beach. Harry was employed at Booms Construction both in building construction and masonry/brickwork, then later retired from Pigeon Co-op in 1991. In retirement, Harry and Patsy enjoyed their winter home in Florida for more than 18 years. Harry took pride in his gardening, especially his vegetables, and loved sharing them with family, friends and neighbors. He had a great memory and could remember anybody’s birthday. He enjoyed wood working, feeding and watching the birds, playing horseshoes, polka music, puzzles, euchre, and just spending time with family and friends, especially with his grandchildren, and great grandchildren. He was a kind hearted man, with a great sense of humor, who enjoyed the simple things in life. He is survived by his wife Patsy Siemen of Harbor Beach, and two daughters: Debra Schave and her husband Daryl of Warren, and Karen Guitar and her husband Larry of Harbor Beach. 4 grandchildren: Jason, Brandon and Ashley Guitar, and BreAnne Herbert-Schave, 3 great-grandchildren: Lily Guitar, Dylan Sawyer, and IsaBella Herbert-Schave, a brother Charles Siemen and his wife Norma of Hartland, sister-in-law Geraldine Siemen of Bad Axe, brothers-in-law Charles Wohlford of Harbor Beach, James Wohlford and his wife Sandra of Harbor Beach, and sister-in-law Lorraine Wohlford of Harbor Beach, also sisters-in-law Shirley Adams and her husband Don of Flint, and Sharon Howard and her husband Bill of Clio. Harry was preceded in death by a grandson Jordan Schave, his siblings: Genevieve (Irving) Winkel, Bernard (Beatrice) Siemen, Margaret (Norman) Nowicki, Marie (Leroy) Geiger, Clara (John) Laban, Leonard (Catherine) Siemen, Robert Siemen and infant sister Stella Siemen, and brothers and sisters-in-law Betty (George) Thoms, Bill Wohlford, and Robert Wohlford. Funeral mass for Harry will be Friday, March 6, 2015, at 11:30 am at Our Lady of Lake Huron Catholic Church, of the Holy Name of Mary Parish, with Fr. William Spencer officiating. Burial will follow in the St. Anthony’s Church Cemetery. Visitation for Harry will be Thursday, March 5, 2015, from 2-8pm at the Ramsey Funeral Home of Harbor Beach. Visitation on Friday will be at the church beginning at 10 am until time of services at 11:30 am. A Parish Vigil Service will take place Thursday at 7 pm at the funeral home.

HARRY J. SIEMEN, age 86 of Harbor Beach, passed away Monday, March 2, 2015, at Covenant Medical Center of Saginaw. He was born on April 4, 1928, in Harbor Beach to the late Anthony and Mary (Gusa) Siemen. Harry Served in the US Army during... View Obituary & Service Information

The family of Harry J. Siemen created this Life Tributes page to make it easy to share your memories.

Send flowers to the Siemen family.