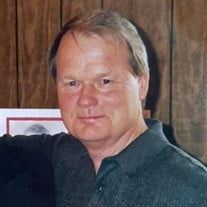 Harvey John Kramer, passed away at the age of 77 on September 8, 2021 with his family by his side at Henry Ford Hospital in Detroit, following a very brave battle with glioblastoma. Harvey was born on March 2, 1944 to the late Raymond & Stella (Holdwick) Kramer. He grew up working on his Family's Farm and taking music lessons. He learned to play piano and took accordion lessons from Marshall "Big Daddy" Lackowski. He joined Lackowski's polka band, playing accordion at weddings on the weekends beginning at the age 12. Harvey graduated from Sts. Peter and Paul High School in Ruth in 1962. He was drafted into the US Army and served our country in Vietnam for 2 years. Harvey and Mary Lee Grekowicz were united in marriage on June 12, 1971. Harvey completed his business degree at Northwood University in Midland, and enjoyed a long and successful career with Vlasic Foods and the Campbell Soup Company. He spent time living in Mississippi and California before retiring at the age of 60. In retirement, Harvey and Mary lee relocated to Ortonville, MI. Harvey enjoyed working in the yard, travelling, and spending time with family, especially his grandchildren. Harvey was a member of St. Daniel Catholic Church in Clarkston. He is survived by his beloved wife of 50 years, Mary Lee, and their two daughters: Kristi and her husband David Murphy of Clarkston, and Kimberly and her husband Eric Lovein of Claremont, CA. Harvey's surviving grandchildren are Jack Murphy of Kalamazoo, Grace Murphy of Chicago, IL, Andrew Murphy of Clarkston, Maxwell Lovein of Claremont, CA and Sabine Lovein of Claremont, CA. Also surviving Harvey is his mother-in-law Betty Siemen of Harbor Beach, and siblings: James Kramer of Harbor Beach, Sylvia (Bob) Sporman of Bay City, Melvin "Cass" Kramer of Harbor Beach, Pauline (Raymond) Boks of Bay City, and Carla (Kenneth) Hoot of Midland. Harvey is also survived by many nieces and nephews who will miss him greatly. Harvey was preceded in death by his parents, Raymond and Stella Kramer, brother David Kramer, sister-in-law Stella (Booms) Kramer, and brother-in-law John Youngs. Funeral mass for Harvey will be Tuesday, September 14, 2021 at 1 pm at St. Anthony's Catholic Church, of Helena, with Fr. David Blazek officiating. Burial will follow in the church cemetery. Visitation for Harvey will be on Monday, from 2-7 pm at the Ramsey Funeral Home of Harbor Beach. A Rosary Service will take place at 6 pm. Visitation on Tuesday, will be at the church, beginning at 12 noon until time of services at 1 pm. Memorials may be given to the Fr. Solanus Capuchin Kitchen. Memories can be shared at www.RamseyFH.com

Harvey John Kramer, passed away at the age of 77 on September 8, 2021 with his family by his side at Henry Ford Hospital in Detroit, following a very brave battle with glioblastoma. Harvey was born on March 2, 1944 to the late Raymond & Stella... View Obituary & Service Information

The family of Harvey John Kramer created this Life Tributes page to make it easy to share your memories.

Harvey John Kramer, passed away at the age of 77 on September...