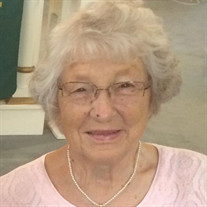 Helen Margaret Wolschleger, age 91, of Harbor Beach passed away on September 22, 2018, with family members at her side. She was born May 19, 1927, in Parisville, MI, the daughter of Joseph and Teckla Romzek. She married Albert Wolschleger on August 26, 1944, at St. Mary's Catholic Church, Parisville, MI. Helen was a loving wife and Mom, Grandma, Great-Grandma, and Great-great Grandma, to whom she lovingly nurtured and welcomed gladly into her heart and home, and for whom she faithfully held up in prayer. She had a green thumb with her gardening and flowers, of which she could tell you from whom each one came. She had a sensational memory and was our family genealogist. She was the matriarch of the Kinde Polka Festival, which she attended this past Sunday. She farmed along side her husband until their retirement. She served on the Altar Society at OLLH (Our Lady of Lake Huron) Church, was a lector and Eucharistic Minister. Together, with her husband, they built the house on the family homestead. She was an avid Scrabble player, and was always ready for a game of euchre. She is survived by her husband, Albert, of 74 years, her children, Lloyd (Sandy Boylan) Wolschleger, Webster, Fla.; Gordon (Sharon Ulfig) Wolschleger, Harbor Beach; Jean said (Robert) Winkel, Harbor Beach; Carol (Daniel) Wilson, Oro Valley, Az.; Evelyn (Gerald) Winkel, Bad Axe; Cyril (Sherrie Koehn) Wolschleger, Ubly; Yvonne, (Stu) Johnson, Dryden; Barry (Mary Jo Helewski) Wolschleger, Ubly; Maria, (Richard) Kaupp, Metamora; Albert II Wolschleger, Bad Axe; Helen (Kevin) Wiley, Kinde; and Carmel (Roger) Osentoski, Ubly, 49 grandchildren, 30 step-grandchildren, 74 great-grandchildren, 10 step-great-grandchildren, and 13 great-great-grandchildren, brother-in-law, Benedict (Vange) Wolschleger, sister-in-law, Verna Romzek. She is preceded in death by her son, Peter, (Angela Melton (Anthony) Wood) Wolschleger, grandchildren, Seth Wolschleger and Tiffany Wilson, sisters and brothers, Gertrude (Paul) Kolar, George (Cecilia) Romzek, Julia (Julius) O'Bee, Lawrence (Theresa) Romzek, Agnes (Peter) Pilot, Lucian (Alice) Romzek, Louis Romzek, Anna (Peter) Kociba, and Leo (Theresa) Romzek. Brother and sister-in-laws, Jerome (Mary) Wolschleger, Leonard (Gertrude) Wolschleger, Vincent (Della) Wolschleger, Ed (Virginia) Wolschleger, Denis (Rosemary) Wolschleger, Norman (Delores) Wolschleger, Marie (Irwin) Kubacki, and Leona (Melvin) Zickie. A wake service will be held at Ramsey Funeral Home on Tuesday, September 25, from 2-8, with a prayer service at 7 pm and from 10:00 am at the church on Wednesday, September 26, 2018. A Mass of Christian Burial will be held at Our Lady of Lake Huron Church, of the Holy Name of Mary Parish at 11:30 am. Burial will be in the church cemetery. In lieu of flowers, donations can be made to OLLH School or Friends of Kinde Polka Festival. A special thanks is given to caregivers, Angie, Jeannette, Anne, and Judy. Memories can be shared at www.RamseyFH.com

Helen Margaret Wolschleger, age 91, of Harbor Beach passed away on September 22, 2018, with family members at her side. She was born May 19, 1927, in Parisville, MI, the daughter of Joseph and Teckla Romzek. She married Albert Wolschleger on... View Obituary & Service Information

The family of Helen Wolschleger created this Life Tributes page to make it easy to share your memories.

Send flowers to the Wolschleger family.