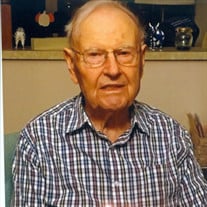 Howard Herman Finkel, age 101, passed away Saturday, December 26, 2020, with his loving wife Della by his side in Courtney Manor Nursing Center of Bad Axe. Howard Spent his entire childhood and adult life, a total of 73 years, on the family farm, on Finkel Road, Port Hope. After he retired, he moved to Harbor Beach where he lived the last quarter of his century. He graduated from Port Hope High School. In addition to farming, he worked for ASCS (Agriculture Stabilization and Conservation Service) for 35 years, 18 of those as Chairman. He was a lifelong active member of St. John Lutheran Church of Port Hope, serving as Financial Secretary and Usher. Howard was dating Della Neal when he was involved in a serious farming accident which left him unable to walk for over a year. She stayed by his side throughout and they married on December 30, 1950. On December 30, they would have celebrated their 70th wedding anniversary. He was known for his quick wit. Howard had a joke for every occasion and he maintained his sense of humor up to his last few days. And those who knew Howard well, knew his passion for woodworking and metal projects. His metal “Yardbirds” grace many of the family backyards. He was a perfectionist when it came to projects. If you tried to help, you were watched and critiqued until it was completed up to his standards. Another retirement interest was completing the daily newspaper crossword puzzle which he did up until recent months when his loss of vision took this joy away. He was preceded in death by his brother Floyd Finkel and sisters: Stella Ruppel, Mildred Pochert and Grace Warnez. He is survived by his wife Della, son Brian (Nancy) Finkel of Sterling Heights, and daughters: Jo Carol (Elwin) Kautz of Melvin, and Brenda (Frank) Kover of Cape Coral, Florida, 13 grandchildren, 23 great grandchildren, and 3 great great grandchildren, and numerous nieces and nephews. Cremation has taken place. Due to the Covid -19 Pandemic, a memorial service will be scheduled for a later date. Arrangements are being handled by the Ramsey Funeral Home of Harbor Beach. Memories can be shared at www.RamseyFH.com

Howard Herman Finkel, age 101, passed away Saturday, December 26, 2020, with his loving wife Della by his side in Courtney Manor Nursing Center of Bad Axe. Howard Spent his entire childhood and adult life, a total of 73 years, on the family... View Obituary & Service Information

The family of Howard H. Finkel created this Life Tributes page to make it easy to share your memories.

Send flowers to the Finkel family.