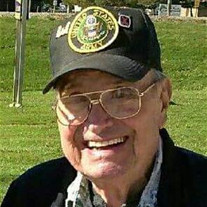 JACK P. LANDENBERG, age 80 of Harbor Beach, passed away Sunday, February 12, 2017 at Lakeview Extended Care and Rehab Center of the Harbor Beach Community Hospital. He was born on April 3, 1936 in Harbor Beach to the late Philip & Lucy (Washlaske) Landenberg. He and Dorothy Fealko were united in marriage on may 23, 1959 in harbor Beach, she preceded him in death on June 11, 1988. Jack served in the US Army, serving in Germany. Jack retired from Nutrasweet after 40 plus years of employment. He was a member of Zion Lutheran Church, and the American Legion Post 197. He was a volunteer driver for the DAV for over 20 years. He enjoyed spending time camping, fishing, hunting, woodworking, family and friends. He is survived by his children: Tami Siemen of Minden City, Dawn Gerstenschlager and her husband James of Harbor Beach, Kim Landenberg of Harbor Beach, 4 grandchildren, 7 great grandchildren, 2 step grandchildren and 7 step great grandchildren, and nephew Walter Cezski, Jr. of Brownstown. Jack was preceded in death by a sister Phyllis Cezeski. Funeral Services for Jack will be Thursday, February 16, 2017 at 11 am at the Ramsey Funeral Home of Harbor Beach, with Rev. Ron Schultz officiating. Cremation will follow at Sunset Valley Crematory of Bay City. Visitation for Jack will be Wednesday, from 2-8pm at the funeral home, and on Thursday beginning at 10 am until time of services at 11 am. Military Honors will be given in Jack’s Honor at the Ramsey Funeral Home, during the service. Memories can be shared at www.RamseyFH.com

The family of Jack P. Landenberg created this Life Tributes page to make it easy to share your memories.

Send flowers to the Landenberg family.