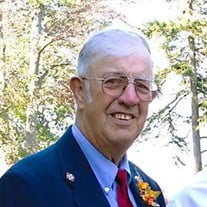 James D. Ritchie, age 79 of Harbor Beach, passed away Wednesday, December 13, 2017 at his home under hospice care. He was born on October 4, 1938 in Harbor Beach to the late Robert and Alice (Pettit) Ritchie. Jim and Marilyn Laeder were united in marriage on June 9, 1962 in Harbor Beach. Jim was a retired employee of the Huron County Road Commission retiring after over 30 years of service. He was the owner/operator of the Ritchie Fire Equipment, Inc. since 1967. He joined the Harbor Beach Area Fire Department in 1960, and was a former fire chief. He was a first responder with the Ramsey Ambulatory Service during the 1970s, and joined the Eastern Huron Ambulance Service in 1979. He continued his fire service career by becoming a State of Michigan Fire Instructor, he was a member and Past President of the Michigan State Fireman’s Association; was a past secretary/treasurer of the past Presidents Fireman’s Club. Jim was a member of the Two Cylinder John Deere Club, and was a former employee of the Toppin-Hazel John Deere Dealership. He enjoyed planting trees, and working in his shop. Jim is survived by his wife Marilyn Ritchie, of Harbor Beach, his daughter Jackie Wehner, and her husband Darryl of Harbor Beach, 3 grandchildren: Ashley (Eric) Palmer of Akron, Kelsey (Jacob) Messing of Minden City, and Averey Wehner of Harbor Beach, 4 great grandchildren: Riley, Colton, Kinsley, and Kypton Messing, his brother-in-law Norman McLeod of Port Huron, also surviving are his sisters-inlaw: Janet (Jack) Detgen of Millington, Donna Poddig of Haslett, Bonnie (Charlie) Stager of Bad Axe, Betty (Ray) Stacer of Texas, and many nieces and nephews. He was preceded in death by his siblings: Robert Ritchie, Mary Nell McLeod, Jack Ritchie, and his mother and father-in-law Walter & Bessie Laeder. Cremation has taken place at May Memorial in Port Huron. A Memorial Service will held at a later date. Arrangements are being handled by the Ramsey Funeral Home of Harbor Beach. Memories can be shared at www.RamseyFH.com Memorials may be given to: St. John Lutheran Church of Port Hope, Harbor Beach Area Fire Department, Eastern Huron Ambulance Service, or the Family Discretionary Fund.

James D. Ritchie, age 79 of Harbor Beach, passed away Wednesday, December 13, 2017 at his home under hospice care. He was born on October 4, 1938 in Harbor Beach to the late Robert and Alice (Pettit) Ritchie. Jim and Marilyn Laeder were united... View Obituary & Service Information

The family of James D. Ritchie created this Life Tributes page to make it easy to share your memories.

Send flowers to the Ritchie family.