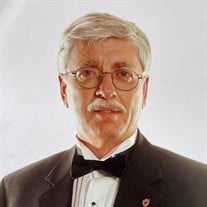 James Ronald Swartz, age 68, of Harbor Beach, Michigan passed away from health complications at Beaumont Hospital on Monday, December 13, 2021. James (also known as Jim) was born on May 26, 1953 to Norman and Angeline Swartz. He grew up on his parents’ farm in Harbor Beach. He played football and baseball in High School. In his earlier career, Jim worked beside his mother Angeline, owning and operating Al’s Restaurant, well known for its prime rib and fried perch.  In the late 1970’s Jim met Rita Mosher at Al’s Restaurant; they were united in marriage on July 17, 1981. After 25 years in the restaurant business, Jim went on to serve over 20 years as a Field Agent at Knights of Columbus. He was also an active member at the Harbor Beach Gun Club. He enjoyed playing golf, watching sports, bowling, and playing cards. He was an avid University of Michigan fan. Jim was full of life. He loved to tell jokes and spend time with family. He especially enjoyed making his grandchildren laugh and watching them run around. He was a great man, and we will all miss him more than words can say. Jim is survived by his wife, Rita Swartz and four children: Tamara Spankie (Daniel) of North Carolina, Thomas Swartz (Monica Pietris) of Michigan, Kristie Klaska (Matthew) of Harbor Beach, and Darrin Swartz (Samantha) of Louisiana. He also had six grandchildren: Skylar and Trent Spankie, Nolan and Korbin Klaska, Cole and Emmie Pietris. In addition, he leaves behind his sisters Shirley Messing and Patricia Emerick, and brothers Robert, Fredrick, and Charles Swartz. Jim was preceded in death by his parents Norman and Angeline Swartz, his sisters Lylan Kucharczyk, Mildred Kozfkay, and Delores Pawlowski, and brothers-in-laws Albert Kucharczyk, Norbert Kozfkay, Allen Messing, and Robert Pawlowski Funeral Mass for Jim will be Friday, December 17, 2021 at 11 am at Our Lady of Lake Huron Catholic Church, of the Holy Name of Mary Parish, with Fr. George Amos officiating. Burial will follow in OLLH Church Cemetery. Visitation for Jim will be Thursday, from 2-8pm at the Ramsey Funeral Home of Harbor Beach. Visitation on Friday, will be at the church, beginning at 10 am until time of services at 11 am. A Knights of Columbus Rosary will take place, Thursday at 7 pm at the funeral home. Memories can be shared at www.RamseyFH.com

James Ronald Swartz, age 68, of Harbor Beach, Michigan passed away from health complications at Beaumont Hospital on Monday, December 13, 2021. James (also known as Jim) was born on May 26, 1953 to Norman and Angeline Swartz. He grew up on his... View Obituary & Service Information

The family of James R. Swartz created this Life Tributes page to make it easy to share your memories.

Send flowers to the Swartz family.