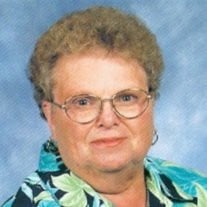 Janet G. Hartz, age 71 of Port Hope, passed away Saturday, August 10, 2013 at McClaren Bay Region Hospital. She was born on February 22, 1942 in Owendale to the late Stanley and Erma (Hartwick) Mellendorf. Janet and Daniel Hartz were united in marriage on February 3, 1968, he preceded her in death on September 14, 2002. Janet was a member of St. John Lutheran Church of Port Hope.She was an avid reader, a fan of the Detroit Tigers, loved to play the lotto, bingo and go to the casino. She also loved sharing stories about her grandchildren. She is survived by her children: Brent Hartz of MacombTownship, Bradley Hartz and his wife Sally of West Bloomfield, and Barry Hartz and his wife Becky of Brighton. 4 grandchildren: Madison, Brendan, Hailey, & Hunter. Brothers: Wayne (Helen) Mellendorf of Cass City, Dale (Betsy) Mellendorf of Cass City, Bruce (Bev) Mellendorf of Fairgrove, Clare (Ruth Ann) Mellendorf of Cass City, Joseph (Sue) Mellendorf of Caro, Arthur (Romelle) Mellendorf of Kansas, Gary (Linda) Mellendorf of Cass City, and Glen Mellendorf of Cass City. Sisters: June Ackerman of Ubly and Ruth (John) Jaworski of Owendale. Janet was preceded in death by her husband Daniel, parents Stanley and Erma Mellendorf and Daughter-in-law Julie Hartz. Funeral Services for Janet will be Tuesday, August 13, 2013 at 11 am at St. John Lutheran Church of Port Hope, with Rev. Greg Eilers officiating. Burial will follow in Lakeview Cemetery of Port Hope. Visitation for Janet will be Monday, from 1-9pm at the Ramsey Funeral Home of Harbor Beach. Visitation on Tuesday will be at the church beginning at 10 am until time of services at 11 am. A scripture service will take place Monday at 7 pm at the funeral home. Memories can be shared at www.RamseyFH.com

The family of Janet G. Hartz created this Life Tributes page to make it easy to share your memories.

Send flowers to the Hartz family.