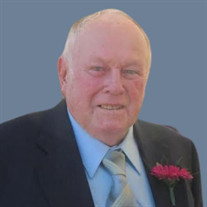 Jerome “Jerry” R. Mixter, age 87, of Ruth was called home to the Lord on Father’s Day, June 20, 2021, at his home under hospice care. Jerry was born on November 30, 1933, in Sherman Township to the late Louis and Leona Mixter. He was united in marriage to Viola Bischer on February 13, 1960, at St. Anthony Church, Helena. Together they raised their four children on their centennial farm north of Ruth. He was a lifelong, active member of St. Peter & Paul Catholic Church of Ruth. He served as a eucharistic minister and usher for many years. After graduating from St. Peter & Paul Catholic High School, Jerry joined the United States Army, serving in the Korean Conflict, where he was stationed in Germany. He farmed with his Uncle August Richard and worked at the Ruth Farmer’s Elevator until 1985. He then worked at Bischer Farms, spreading brown fertilizer and topping beets until November fourteenth of every year, when he headed to deer camp. Jerry loved Polka music, traveling, hunting, fishing, and playing cards – euchre in particular. He cherished time spent with his friends and family, especially his great-grandsons. Many Sunday afternoons you could find Jerry down at the family woods or challenging himself with a good puzzle until macular degeneration took his eyesight. Jerry was also known to visit the local House of Knowledge where he enjoyed a hopper schnapper. Jerry is survived by his wife of 61 years and his four children Douglas (Karen) Mixter of Lyons, Linda (James) Donovan of Naples, FL, Thomas (Laurie) Wasilla, AK, Michelle (Scott) Daniels of Birmingham, AL; six grandchildren: Travis (Kari) Osantoski, Dr. Trista Osantoski, James (Amy) Mixter, Richard Mixter, Kyle Fecik, Kaitlin Fecik; two step-grandchildren: Austin Daniels and Meagan Daniels; two great-grandsons: Lyle Osantoski and Noah Osantoski; and one brother; Gregory (Deloris) Mixter. He was preceded in death by his baby brother: Vincent Mixter; sister: Arlene Osborn; father Louis Mixter and mother Leona Weber. Pallbearers will be Jerry’s hunting nephews; Allen Bischer, Randy Bischer, Kevin Bischer, Gary Bischer, Dennis Bischer, and Dave Puvalowski. The Mass of Christian Burial will be celebrated at 11 am, with Fr. T.J. Fleming officiating on Friday, June 25, 2021, at the Holy Apostles Parish St. Peter & Paul Church, Ruth. Burial will follow in St. Peter & Paul Cemetery with full military rites provided by area veterans. The family will receive friends on Thursday, June 24, 2021, from 2-8 p.m. at the Ramsey Funeral Home, Harbor Beach. Visitation on Friday, will be at the church, beginning at 10am until time of services at 11 am. The rosary will be prayed by the Knights of Columbus and Usher Club on Thursday at 7 p.m. at the funeral home. The family would like to thank the Disabled American Veterans Association and Hartland Hospice for their wonderful care. Memorials may be offered to the Holy Apostles Parish St. Peter & Paul Church or the charity of the donor’s choice. Memories can be shared at wwww.RamseyFH.com

The family of Jerome R. Mixter created this Life Tributes page to make it easy to share your memories.

Send flowers to the Mixter family.