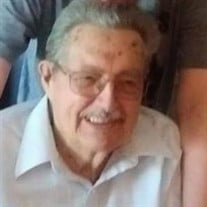 John E. “Jack” Stickney, age 88 of Port Hope, passed away Monday, July 3, 2017, surrounded by his family, following complications from surgery. Jack was born on March 7, 1929 in Big Beaver, Michigan. He served in the US Army, during World War II, serving in Okinawa at the end of the war, and in various capacities at other locations including Fort Knox. Jack married Elaine MacKinnon on March 3, 1955 in Clawson. She preceded him in death on September 23, 2015. He was a master tool and Die maker in his 20s, and then turned to law enforcement. He was chief of police in Harbor Beach for over 20 years. After retirement he worked as a police officer in Port Austin and the Huron County Sheriff Department. He was also a licensed Private Investigator, owning the Lake Huron P.I. Services, and served on the Harbor Beach School Board. Jack was a lifelong fisherman and hunter, and was a former member of: the Harbor Beach Rotary Club, the Harbor Beach Lions Club, the Huron County Big Brothers, the Masonic Lodge, Shriners, Past President of the Huron County Police Chief Association, the Clawson Jaycees, Oakland County Youth Protective Services, Michigan Chiefs Police Association, Jack is survived by his daughters; Debbra Fox (Doug) of Clarkston, Kim Jacobus-Syfrett (Bob & John) of Escondido, CA, brothersPete Mancour and Dennis Mancour, grandfather of Ian Fox, Jenna (Daniel) Fox, and Bobbie (Trey) Jackson, 7 great grandchildren and 6 great great grandchildren. He was preceded in death by his wife Elaine, parents Al and Clara, a brother Bob and a sister JoAnn. Funeral Services for Jack will be Saturday, July 8, 2017 at 2 pm at the Ramsey Funeral Home of Harbor Beach, with Rev. Ron Schultz officiating. Burial will take place at Great Lakes National Cemetery, in Holly, in the next two weeks. Visitation for Jack will be on Friday from 2-8pm at the funeral home. Visitation on Saturday will begin at 1 pm until time of services at 2pm. Memorials may be given to Shriners Hospital, Dutton Farm, or ALS of Michigan. Memories can be shared at www.RamseyFH.com

The family of John E. "Jack" Stickney created this Life Tributes page to make it easy to share your memories.

Send flowers to the Stickney family.