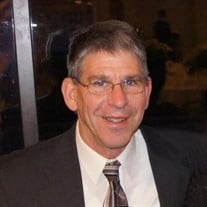 John Mausolf, 67, of Harbor Beach passed away May 12, 2020 at Lake Huron Medical Center in Port Huron. John was born June 19, 1952 to the late Earl and Frances (LaMielle) Mausolf. He attended grade school in Helena and was part of the last class to graduate from Our Lady of Lake Huron High School in 1970. John married his high school sweetheart and true love, Juli Blanchard, daughter of the late Eirnel and Marie (Breathour) Blanchard on June 23, 1973. They lived and loved together for 38 years before her death in 2011. Juli’s siblings Terry, Joe, Mari and Jay remained close with John after her passing, exhibiting the definition of true family. He found love again and married Elizabeth Mendoza on August 22, 2015. John spent his career in the agricultural industry and took great pride in helping local farms raise successful crops each year. He was a master at his craft. He retired from Crop Production Services of Ubly in 2016, to enjoy his three great passions: fishing, the outdoors and his grandkids. In the last years of his life, he enjoyed those three things to the very fullest. His perfect day was a morning on Lake Huron catching walleye and then cooking them up for his family in the evening. John is survived by his wife Elizabeth of Harbor Beach, Michigan, his daughter Beth Gonzales and her husband Dan (his favorite fishing buddy) of Harbor Beach, Michigan and his son David and his wife Jessica (York) of Gladwin, Michigan. He leaves behind his 8 precious grandchildren, the apples of his eye: Madison, Paige, Owen and Julia Woody and Ansley, Chloe, Keaton and Juliette Mausolf. He is also survived by Elizabeth’s daughters and their families, Kimberly and Jerry Helsel and their children Mitchell and Jasmine, and Katie and Jon Robertson and their daughters Sydney and Cameron, all of North Carolina. John leaves behind his siblings, Rosalee Clor of St. Clair, Joe (June) Mausolf of Filion, Kathy (John) Tenbusch of Minden City, Marilyn (Don) Klee of Verona, Margaret (Tom) Callender of Ruth, Jerry (Bonnie) Mausolf of St. Clair Shores and sister in law Linda Mausolf of Helena. Preceding him in death was his brother Jim Mausolf. Arrangements are being handled by the Ramsey Funeral Home of Harbor Beach. Memorials may be given to the family, who will be establishing a memorial scholarship in John’s name. Memories can be shared at www.RamseyFH.com

John Mausolf, 67, of Harbor Beach passed away May 12, 2020 at Lake Huron Medical Center in Port Huron. John was born June 19, 1952 to the late Earl and Frances (LaMielle) Mausolf. He attended grade school in Helena and was part of the last... View Obituary & Service Information

The family of John F. Mausolf created this Life Tributes page to make it easy to share your memories.

Send flowers to the Mausolf family.