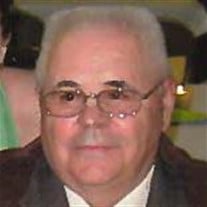 KENNETH A. SADRO, age 79 of Bad Axe, passed away Friday, September 9, 2016 at Henry Ford Hospital in Detroit from complications following heart surgery. He was born on January 29, 1937 in Ruth to the late Herbert and Gertrude (Partaka) Sadro. He married his sweetheart, Alice Terbrack on June 7, 1958 at Sts. Peter and Paul Catholic Church in Ruth. Ken (aka) “Boompa” (as he was called by his grand and great grandchildren) was a very loving father, grandfather, and great grandfather who loved to get down on the floor and play with his great grandchildren; his family meant everything to him. At other times, he would just sit back and watch the kids play with a giant smile on his face and a loving look in his eyes. He also liked to spend time back at his pond just taking in God’s beautiful gift of nature. He had an immense affection for dogs, having several beloved dogs as pets over the course of his life; there was no dog that wasn’t his friend/ He enjoyed hobbies of oil painting, deer hunting and going on short getaways “up north” several times a year. As a child, he moved with his parents from Detroit to a farm his Dad purchased near Rapson. He eventually took over the family farm which he and alice operated until his retirement. He was a life long member of St. Joseph Catholic Church in Rapson (St. Hubert Parish). Ken is survived by his wife of 58 years, Alice; children Douglas Sadro and Margaret Sadro of Bad Axe, and Joy (Wally) Tenbusch of Bad Axe. Grandchildren: Alan (Amanda) Sadro, Katie (Kyle) Protzman, Jamie (Chris) Pfeffer, Ryan (Keri) Tenbusch, Curt (Emily) tenbusch, and Kelli (pete) Messing. Great-grandchildren Logan and Shelby Sadro, Allison Protzman, kaitlyn and Nolan Pfeffer, Isabella and Brooke Tenbusch, Owen, James and Leo Tenbusch, Hannah Madelyn and Wyatt Messing. He was preceded in death by his parents, Herbert and Gertrude Sadro, brother Ralph Saldro, Father and mother-in-law John and Cecilia Terbrack an many brothers and sisters-in-law. Funeral Mass for Ken will be Tuesday, September 13, 2016 at 11 am at St. Joseph Catholic Church, of the St. Hubert Parish, with Fr. Rob Howe officiating. Burial will follow in the church cemetery. Visitation for Ken will be Monday, from 3-9 pm at the Ramsey Funeral Home of Harbor Beach. Visitation on Tuesday will be at the church beginning at 10 am until time of services at 11 am. A Parish Vigil Service will take place Monday at 7 pm at the funeral home. Memories can be shared at www.RamseyFH.com

KENNETH A. SADRO, age 79 of Bad Axe, passed away Friday, September 9, 2016 at Henry Ford Hospital in Detroit from complications following heart surgery. He was born on January 29, 1937 in Ruth to the late Herbert and Gertrude (Partaka) Sadro.... View Obituary & Service Information

The family of Kenneth A. Sadro created this Life Tributes page to make it easy to share your memories.

Send flowers to the Sadro family.