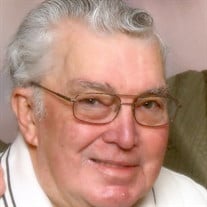 Lawrence C. “Bud” Ruhl, age 85 of Harbor Beach, passed away Tuesday, February 16, 2016 at Harbor Beach Community Hospital. He was born on September 3, 1930 in Harbor Beach to the late Lawrence and Viola (Hunter) Ruhl. Bud served in the US Navy serving over seas from 1950 – 1954. He and Barbara Melick were united in marriage on October 6, 1951 in Harbor Beach. Bud worked as a pipefitter for the Huron Milling Company and later Hercules, Inc. He graduated from OLLH High School in 1949 and was named a Top Ten Athlete when the High School closed. He enjoyed coffee with the guys, driving his jeep, his never ending love for his dogs, moving snow with his tractor, and spending time with his family. He is survived by his wife Barbara Ruhl of Harbor Beach, and children: Linda Weldon and her husband Keith of Harbor Beach, Kathy Currie and her husband Chuck of Harbor Beach, Brian Ruhl and his wife Julie of Harbor Beach, Lisa Lewis and her husband Jim of Harbor Beach, 12 grandchildren, and 16 great grandchildren. Bud was preceded in death by his siblings: Rita Kanaby, Lorna Gaffke, Joan Johnson, Shirley Ruhl, and 2 infant brothers Harold and Gerald. Cremation has taken place at Sunset Valley Crematory of Bay City. A Memorial Service will take place Friday, February 19, 2016 at 11 am at the United Methodist Church of Harbor Beach, with Rev. Mark Ryan officiating. Internment will follow in Rock Falls Cemetery. A gathering of friends will begin at the church at 10 am until time of services at 11 am. Memories can be shared at www.RamseyFH.com

The family of Lawrence "Bud" Ruhl created this Life Tributes page to make it easy to share your memories.

Send flowers to the Ruhl family.