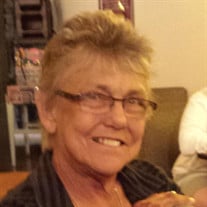 LORRAINE A. ROBERTS, age 65 of Harbor Beach, passed away Friday, September 9, 2016 at Covenant Medical Center of Saginaw. She was born on October 18, 1950 to the late Michael and Elsie (Bartels) Matczak in Detroit. Lori was a member of the OLLH Catholic Church, she was a diabetic for 60 years, and received her American Diabetes 50 year award. She was a thirty year member of AA, and was an AA Sponsor to many people. She was very active at OLLH, being a Lay Minister, served on many committees, and was involved in the Bishops Council. She enjoyed doing crosswords, sending cards to people, building fires, spending time with her grandchildren, and driving her 1972 Convertible MG. Lori’s strong faith and love of our Savior helped her with many of her health issues. She was a strong, determined, caring and loving woman. Lori is survived by her children: Chad Toms and his wife Dawn of Grand Blanc, Alison Roberts of Arizona, 3 grandchildren: Drake, Paige, Lucas, a sister Bernie Marsh of Port Hope, brothers: Clifford Matczak of Port Hope, Michael Matczak of Port Austin, special niece Alyse Kozfkay and her sons, many cousins, nieces and nephews, and special friends: Joann Tomczyk, Fran Holdwick, Susan Graham, Tony Vigari, Bob Collick, Patti Hamel, Dean, Paul, and many more. She was preceded in death by her brother-in-law Dave Marsh in 2003. Funeral Mass for Lori will be Thursday, September 15, 2016 at 11:30 am at Our Lady of Lake Huron Catholic Church, of the Holy Name of Mary Parish, with Fr. William Spencer officiating. Burial will follow in New River Cemetery. Visitation for Lori will be Wednesday from 2-8pm at the Ramsey Funeral Home of Harbor Beach, Visitation on Thursday will be at the church beginning at 10 am until time of services at 11:30 am. A Parish Vigil Service and Rosary Service will take place Wednesday at 7 pm at the funeral home. Lori's wishes are that memorials be given to the Juvenile Diabetes Research Foundation. Memories can be shared at www.RamseyFH.com

LORRAINE A. ROBERTS, age 65 of Harbor Beach, passed away Friday, September 9, 2016 at Covenant Medical Center of Saginaw. She was born on October 18, 1950 to the late Michael and Elsie (Bartels) Matczak in Detroit. Lori was a member of the OLLH... View Obituary & Service Information

The family of Lorraine A. Roberts created this Life Tributes page to make it easy to share your memories.

LORRAINE A. ROBERTS, age 65 of Harbor Beach, passed away Friday,...

Send flowers to the Roberts family.