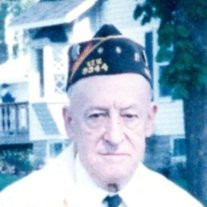 LYLE L. MORLEY, age 92, of Harbor Beach, passed away Sunday, December 29, 2013 at Courtney Manor Nursing Center of Bad Axe. He was born on August 10, 1921 in Akron to the late Samuel George and Lois (Parker) Morley. Lyle and Barbara June Brown were united in marriage on June 28, 1941. She preceded him in death on September 23, 2001. Lyle served over seas in the US Army during World War II. Lyle worked as the Waste Treatment Operator at Hercules Inc., retiring in 1983 after 44 years of service. Lyle was a member of the Harbor Beach Fire Department, where he served as assistant chief, was Post Commander for the VFW Post of Harbor Beach, and was a service officer. Lyle enjoyed fishing and hunting, and spending time with his family. Lyle is survived by his children: Linda Leese and her husband Dale of Flushing, Carol Zaebst and her husband Wayne of Metamora, David Morley and his wife Deb of Harbor Beach, Roy Morley of Harbor Beach, and Mary Alice Kosal and her husband Bruce of Harbor Beach, 8 grandchildren and 10 great grandchildren. Lyle was preceded in death by his brothers: Joe, Lee, Guy and Clare Morley, and sisters: Ruby Roggenbuck, Twila Kolonak and Latisha Robertson. Funeral Services for Lyle will be Thursday January 2, 2013 at 11 am at the Ramsey Funeral Home of Harbor Beach, with Dr. Phil Tousley officiating. Burial will follow in the New River Cemetery. Visitation for Lyle will be Wednesday, from 2-8pm at the Ramsey Funeral Home of Harbor Beach. Visitation on Thursday will begin at 10 am until time of services at 11 am. Military honors will be given by the VFW Post of Harbor Beach.

The family of Lyle L. Morley created this Life Tributes page to make it easy to share your memories.

Send flowers to the Morley family.