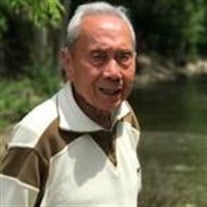 Dr. Manuel Teves, age 94, of Harbor Beach, Michigan, was welcomed into the hands of our Lord Jesus Christ on July 4, 2017, following a brief illness. He was born in Dumaguette, Philippines, to Rosa and Mariano Teves. His paternal grandfather, Lluch Teves had immigrated to the Philippines from Valencia, Spain. He met Patricia McKenney, RN, from Tillsonberg, Ontario in Blain Hospital in Detroit 1962, they were married in the hospital, and wedding announcement shares that they threw aspirin at the wedding. They had moved from Detroit to Harbor Beach, Michigan in 1969 where both Manuel and Patricia established his medical practice, where he offered his medical services to the citizens of Harbor Beach and surrounding areas. Dr. Manuel Teves had served as a Guerilla fighter in the Philippine Islands during WWII for the American Army. His story had been authored by Janis Stein in her book, “Home Town Hero’s.” Dr. Teves had served the Harbor Beach community since 1969 and served the Harbor Beach Community for 33 years as a General Surgeon, Family Practice Physician, and had been the Chief of Staff of the Harbor Beach Hospital. Dr. Teves’ education and accomplishments include: ● San Carlos University, Philippines with an Associate of Art in Prescribed Medicine in 1949; ● Manila Central University with a Doctor in Medicine in 1954; ● Internship at St. Mary’s Long Beach Hospital 1954; ● Board Certified in the Republic of the Philippines in 1956; ● Residency in Family Practice in Borgess Hospital Kalamazoo in 1958; ● 5 -year surgical residency at Alexander Blain Hospital, Detroit, Michigan; was deemed a Fellow by the American College of Angiology in 1964 ● Deemed both a Physician and Surgeon by the Michigan State Board of Registration in Medicine in 1965; ● Fellow by the American Geriatrics Society in 1966 Dr. Teves faithfully devoted his career to providing comprehensive and compassionate family practice and surgical medical services to citizens of the Harbor Beach community and surrounding towns, whom he treasured. Dr. Teves was typically found either in the emergency room, operating room, on rounds in acute care, or House Call visits. He also enjoyed spending his free time by the lake avidly working outdoors gardening or cutting wood with his chain saw, driving his tractor, visiting apple orchards, and drinking coffee. Feeding the birds was an utmost priority, especially since in his later years, he was unable to hear the birds. Dr. Teves enjoy sitting by his picturesque window reading the Bible and praying his rosary. His favorited the verse, “You shall love the Lord with all of your heart, with all of your soul, and with all your mind and second, it is like this. You shall love your neighbor as yourself,” Matthew 22: 37- 39. His favorite past times included: fishing, spending time outdoors, and spending time with his family and “Meg” his loyal Labrador who preceded him. He and his wife, Patricia, enjoyed a cottage in Paint Lake Ontario, Northern Canada which was very rustic and they had also gone on several hunting and fishing excursions in both Ontario and Michigan. Dr. Teves had been a member of Holy Mary Parish Harbor Beach and of St. Mary Mystical Rose in Armada, MI. He had also been a member of the Lions Club and the Veterans of Foreign War in Harbor Beach. In the past he had been an active member of Huron County Medical Society. He was preceded in death by his loving wife Patricia in 1995, and his parents; sisters: Adelaide Bautista, Remedios deVera; and Paquito Teves, and Pacing Teves. Dr. Teves is survived his daughters Karen Teves-Frazier and husband Craig, Patricia (Teves) and husband Jeffery Buchholz; Jacqueline (Teves) Cleary; and step- daughter Colleen Nolan-Calu. He is also survived by grand-children: Ashley (Ryan) Lister, Brett Buchholz and (Angie DiAmico) and great granddaughter Leah; Amber Cleary, Grant Cleary; step-grandchildren: Jenna, Travis and Erica Calu. His sister, Luzbella Teves-Mejia, and her husband Pafnucio Meija of Iligan, Philippines; nieces Mary Ann Olzmann, Rose Mary and Mary Lou (deVera), Scott Olzmann, James Olzmann, Ph.D., and Amy Olzmann, Ph.D.; and cousins: Dr. and Mrs. Levi Guerrero, and Dr. and Mrs. Augustus Guerrero and families; and several nieces and nephews in the Philippines. Celebration of Life information: Visitation will be held from 2 PM – 8 PM on Sunday, July 9, 2017 at the Ramsey Funeral Home in Harbor Beach. A mass of Christian Burial will be on Monday, July 10, 2017, at 11:00 AM at Holy Mary Parish Harbor Beach, Michigan. Interment will be in Our Lady of Lake Huron Cemetery with military honors provided by the VFW/ American Legion. In lieu of flowers, the family is requesting donations allocated to: Veterans of Foreign War, Lions Club, Eastern Huron Ambulance, Holy Mary Parish, or Nonprofit of choice, or Deaf and Blind charity in the Philippines, checks may be made to: Monsignor Rev. Jose S. Advincula for “Balay Dayonan” (Deaf and Blind). Memories can be shared at www.RamseyFH.com

Dr. Manuel Teves, age 94, of Harbor Beach, Michigan, was welcomed into the hands of our Lord Jesus Christ on July 4, 2017, following a brief illness. He was born in Dumaguette, Philippines, to Rosa and Mariano Teves. His paternal grandfather,... View Obituary & Service Information

The family of Dr. Manuel Teves created this Life Tributes page to make it easy to share your memories.

Send flowers to the Teves family.