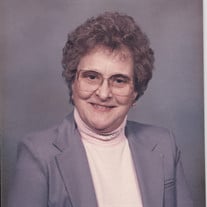 Margaret E. Bauer, age 86 of Deckerville, passed away Friday, December 29, 2017 at Autumnwood of Deckerville. She was born on February 22, 1931 in Lucinda, Pennsylvania, to the late Jacob & Theresa (Engel) Gatesman. Margaret and Richard Bauer were united in marriage on October 23, 1954 in Lucinda, PA. Margaret was a member of Sts. Peter and Paul Catholic church, of the Holy Apostles Parish. She enjoyed volunteering at church, gardening and especially feeding the birds. Margaret is survived by her husband Richard Bauer of Deckerville, children: Juliana Roberts of Shelby Twp, Stephen (Florence) Bauer of Romeo, Bernard Bauer of Deckerville, Timothy (Heidi) Bauer of Rochester Hills, grandchildren: Matthew & Michael Roberts, Christina Lazzara, Andrew, Patrick, Josie and Maddie Bauer, and 4 great grandchildren. She was preceded in death by her brother Aloysius Gatesman. Funeral mass for Margaret will be Thursday, January 4, 2017 at 11 am at the Sts. Peter and Paul Catholic Church, of the Holy Apostles Parish, with Fr. Christopher Coman officiating. Burial will take place at St. Joseph’s Cemetery in Lucinda, PA. Visitation for Margaret will be Wednesday, January 3, 2017 from 2-8pm at the Ramsey Funeral Home of Harbor Beach. Visitation on Thursday will be at the church from 10 am until time of services at 11 am. Memories can be shared at www.RamseyFH.com

The family of Margaret E. Bauer created this Life Tributes page to make it easy to share your memories.

Send flowers to the Bauer family.