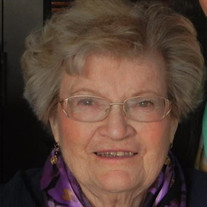 Margaret C. Seibert, age 90 of Chelsea, passed away Sunday, March 26, 2017 at Silver Maples Assisted Living, under hospice care. She was born on January 17, 1927 in Port Hope to the late Frank & Maggie (Barclay) Quick. She graduated from Port Hope Community School in 1942. She and Jack Seibert were united in marriage on March 10, 1951 in Port Hope. He preceded her in death in 2006. Margaret earned a degree in cosmetology. She worked at the Linden School in the Food Service Department. Margaret was a Girl Scout leader for many years and was active in the Pare School PTA. She also was a Deacon at Lake Shore Presbyterian Church and Linden Presbyterian Church. She enjoyed cooking, sewing, travelling and her family. She is survived by her children: Jackie Thompson and her husband Ed of Charleston, West Virginia, Deborah Tuckey and her husband Charles of Dexter, Gwen Bertram and her husband Fred of Katy, Texas, and Michael Seibert and his wife Maria of Canton, Georgia, 10 grandchildren and 2 great grandchildren. Margaret was preceded in death by her siblings: Lois Banker, Doris Stocks, Elaine Bohn and Oren Quick. Funeral Services for Margaret will be Wednesday, March 29, 2017 at 11 am at the Ramsey Funeral Home of Harbor Beach, with Pastor Ed Thompson officiating. Burial will follow in Rock Falls Cemetery. Visitation for Margaret will be Tuesday, from 3-7pm at the funeral home and on Wednesday beginning at 10 am until time of services at 11 am. The family wishes to extend their gratitude to the Arbor Hospice and Silver Maples of Chelsea Staff for their support in her final days. Memorials may be given to the Silver Maples Student Scholarship Fund. A Memorial Service will also take place on Friday, March 31, 2017 at 10:30 at Silver Maples in Chelsea. Memories can be shared at www.RamseyFH.com

The family of Margaret C. Seibert created this Life Tributes page to make it easy to share your memories.

Send flowers to the Seibert family.