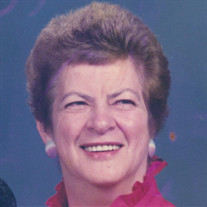 Marla Kriewall spent her life along the 11 miles from Harbor Beach Community Hospital to the family farm northwest of Port Hope. Within those 11 miles, she tended the sick, comforted the elderly, taught the young, took the lead where needed, and raised a family. When people there said the name “Marla,” everyone knew exactly who they were talking about. Marla Marie Kriewall, 88, of Port Hope, died peacefully Oct. 22 in Harbor Beach Community Hospital. She died with family members by her side and in the place she treasured. Marla Winkel was born May 17, 1931, in the Harbor Beach Hospital to the late Martin and Emma Winkel. She married John Kriewall on Nov. 22, 1952. John died In 2018. They have five children: Garth (Diane) Kriewall of Port Huron; Rodney (Kathy) Kriewall of San Jose, CA; Beth (Gene) King of Bancroft, MI; Martin (Darla) Kriewall of New Richmond, WI; and Dinah (Wayne) Watson of Doraville, GA. They have six grandchildren: Rayna (Josh) Wierenga and Faith (Wes) Carlson of San Luis Obispo, CA; Heather (Jordan) Adams of Mount Pleasant, SC; John Walter (Ann) Kriewall of Columbus, OH; Will Kriewall of East Lansing; and David Franklin of Woodbury, MN. They also have four great-children. Marla worked at Harbor Beach Community Hospital immediately after graduating from St. Mary’s Nursing School in Saginaw in 1952. She later was responsible for opening a long-term care unit at the hospital. She oversaw designing the unit, doing the paperwork, buying equipment and training staff. She managed the unit for many years. It was the same highly respected facility in which she spent the final two years of her life. After retiring as a registered nurse at the hospital, Marla was recruited to join the hospital board. She soon was named chairwoman. In addition, she was deeply involved with and was a donor to the hospital foundation, whose goal is to ensure the long-term viability of the community-owned hospital. Her other civic activities included the local Girl Scouts council, Port Hope Community Schools, the Port Hope Chamber of Commerce, St. John Lutheran Church and the Grindstone-Port Hope Sportsman’s Club. She also worked at the family farm, where one of her children once remarked, “Mom, aren’t you glad you had so many children to help you with this big garden?” She and John traveled extensively around the United States and the world, which she greatly enjoyed. Visitation will be 2 to 8 p.m. Friday, Oct. 25, 2019 at Ramsey Funeral Home, Harbor Beach. Services will be 11 a.m. Saturday, Oct. 26 at St. John Lutheran Church, Port Hope. Visitation also will be 10 a.m. until time of services at the church. Memorials may be made to Harbor Beach Community Hospital Lakeview Extended Care & Rehab, the HBCH Foundation, or St. John Lutheran Church. Interment will be in Port Hope’s Marquardt Cemetery — which is 12 miles from the hospital. Memories can be shared at www.RamseyFH.com

Marla Kriewall spent her life along the 11 miles from Harbor Beach Community Hospital to the family farm northwest of Port Hope. Within those 11 miles, she tended the sick, comforted the elderly, taught the young, took the lead where needed,... View Obituary & Service Information

The family of Marla Kriewall created this Life Tributes page to make it easy to share your memories.

Marla Kriewall spent her life along the 11 miles from Harbor...

Send flowers to the Kriewall family.