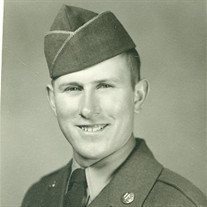 MELVIN L. LONG, age 86, of Harbor Beach, passed away Tuesday, October 09, 2018 at Harbor Beach Community Hospital. He was born on July 19, 1932 in Harbor Beach to the late Frederick & Lucy (Will) Long. Melvin served in the US Army from 1952-1954, serving during the Korean Conflict. He and Sally Hurren were united in marriage on January 19, 1957.She preceded him in death on October 22, 2011 Melvin retired from the City of Harbor Beach, in 1992 after 33 years of service. Melvin was a member of the United Methodist Church of Harbor Beach, the AmVets Post 115 of Port Hope, and the Harbor Beach Gun Club. Melvin enjoyed wood crafting and fixing. He was an avid deer hunter, fisherman, and loved the Outdoors. He is survived by his children: Jerry Long and his wife Pauline of Ubly, Susan Palach and her husband Dennis of Harbor Beach, 2 grandchildren: David and Gary Palach, brother Allen Long of Oklahoma, and sister Thelma Viger of Algonac. Melvin was preceded in death by his siblings: Raymond Long, Violet Landschoot, Frances NOwiski, Irene Long, Bernice Bernum. Funeral Services for Melvin will be Friday, October 12, 2018 at 12pm at the United Methodist Church of Harbor Beach, with Rev. Sari Brown officiating. Burial will follow in Rock Falls Cemetery. Visitation for Melvin will be at the church, on Friday, from 10am until time of services at 12 pm. Arrangements are being handled by the Ramsey Funeral Home of Harbor Beach. Memories can be shared at www.RamseyFH.com

The family of Melvin L. Long created this Life Tributes page to make it easy to share your memories.

Send flowers to the Long family.