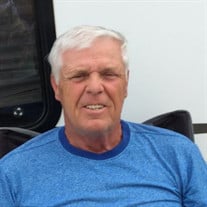 Michael M. MacPhee, age 68 of Bad Axe, passed away Sunday, April 1, 2018 at his home, under hospice care, with his family by his side. He was born on July 1, 1949 in Detroit. Michael served in the US Army, from 1968-1972. He and Darlene Luce were united in marriage on May 8, 1971 in St. Patrick’s Church in Portland, Michigan. Mike and Darlene lived in Portland from 1972-2006. Mike worked as a telephone installation/repair man for GTE before retiring from Verizon after many years of service. He collected stamps his whole life. He enjoyed going to the coffee shop to visit with the boys, selling 50/50 tickets, fishing, working on the lawn, eating at buffets and going to the casino. He never missed a beat with his grandchildren! Mike is survived by his wife Darlene MacPhee of Bad Axe, and sons: Craig (Karen) MacPhee of Bad Axe, and Ryan (Shawn) MacPhee of Coleman, and grandchildren, Toby, Jacob, Matthew, Zachary, and sisters: Donna Burch of Lansing, and Doreen Pickett of Kentucky. He was preceded in death by his parents, Oscar Petersen and Elizabeth Ebinger Petersen, and his brother, Patrick MacPhee. In keeping with Mike’s wishes, he has been cremated at the Sunset Valley Crematory of Bay City. A memorial service will take place at a later date. Ramsey Funeral Home of Harbor Beach is handling the arrangements. Memories can be shared at www.RamseyFH.com

The family of Michael M. MacPhee created this Life Tributes page to make it easy to share your memories.

Send flowers to the MacPhee family.